World-famous for its prestigious Casino and Grand Prix, the elegant principality of Monaco is one of the most alluring places to visit in Europe… While technically a separate country, Monaco’s proximity to France’s Mediterranean coastline makes a jaunt from Nice almost obligatory. Therefore, when I found myself enjoying a long weekend on the French Riviera, I knew I had to take a Nice to Monaco Day Trip… And below you’ll find my ultimate Itinerary.

What to see in Monaco in one day –

Monaco’s total area is only about 2km², making it the second smallest country in the world. This tiny size means you can easily tour Monaco in a day! In fact, I left Nice in the late-morning and still found I had enough time to enjoy most of the country’s highlights!

I started my Monaco Day trip at the principality’s most famous attraction, the Monte Carlo Casino. Built-in 1858, the casino quickly became a beacon of wealth and excess, and over the years it’s notability has only increased. This is largely thanks to world-renowned films featuring the casino in several famous scenes, such as James Bond: Golden Eye (1995). 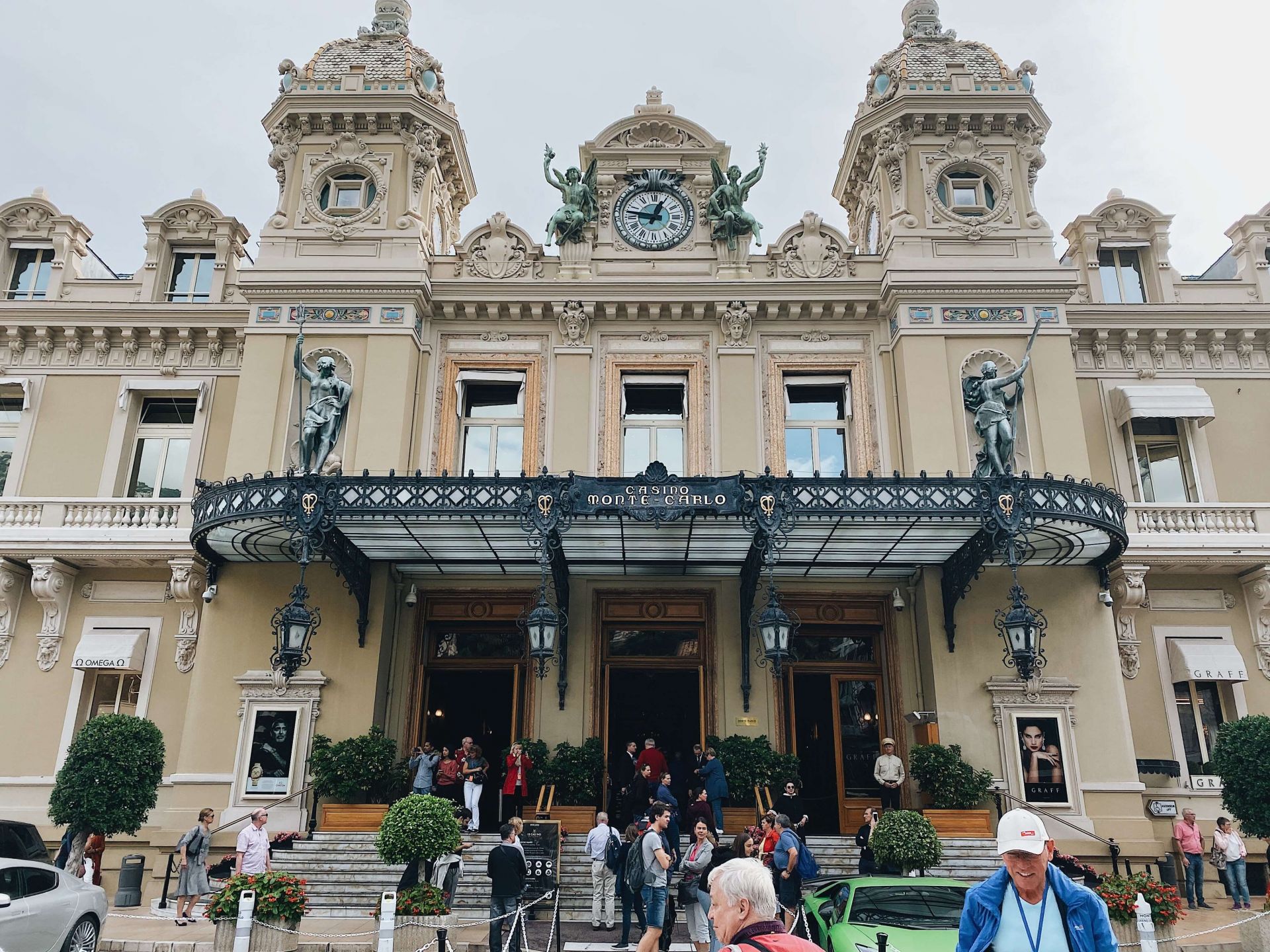 There’s always something magical and thrilling about visiting such an iconic location! So I was such to get a photo in front of the Casinos magnificent fountain, and then simply enjoyed taking in the general grandeur and opulence of the surrounding area!

While I didn’t go inside myself, you can visit the Casinos first room (from 2pm onwards) for free. But, if you want to try your hand at gambling at this iconic establishment, you’ll have to dress to impress and admissions costs €17. 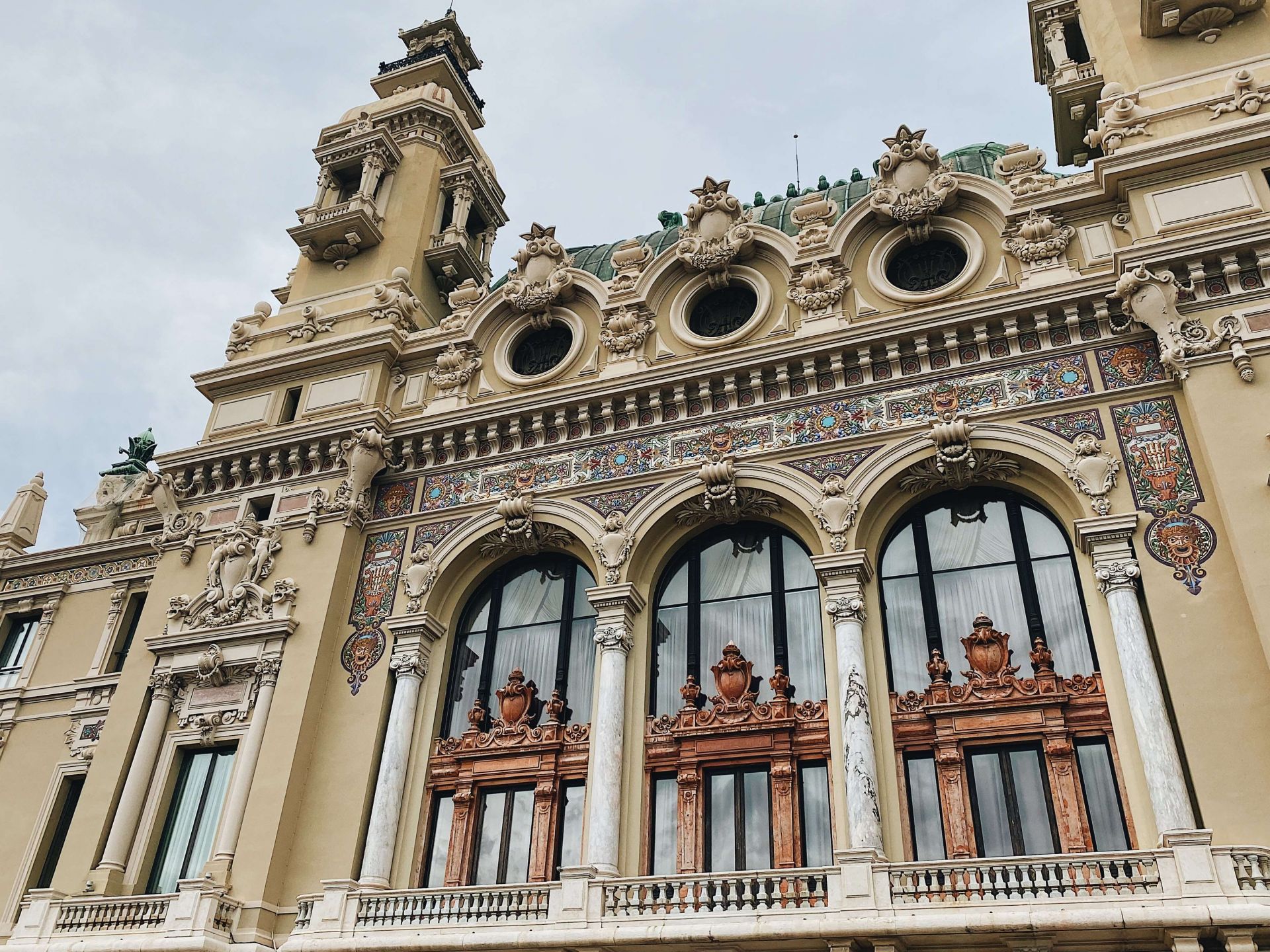 Because no guide on what to see in Monaco in one day is complete until it features a superyacht, the next stop on my itinerary was Port Hercules.

Home to the annual Monaco Yacht Show, the port has been used since ancient times! However, it underwent major renovations at the start of the 20th-century so it could accommodate the evergrowing number of yacht’s visiting the Côte d’Azur.

Today the port is one of the most famous in the world, and it’s definitely the heart of Monaco as views throughout the city focus on it! For example, on my walk from Monte Carlo Casino to the harbor, I was treated to several glimpses of the magnificent boats on display. 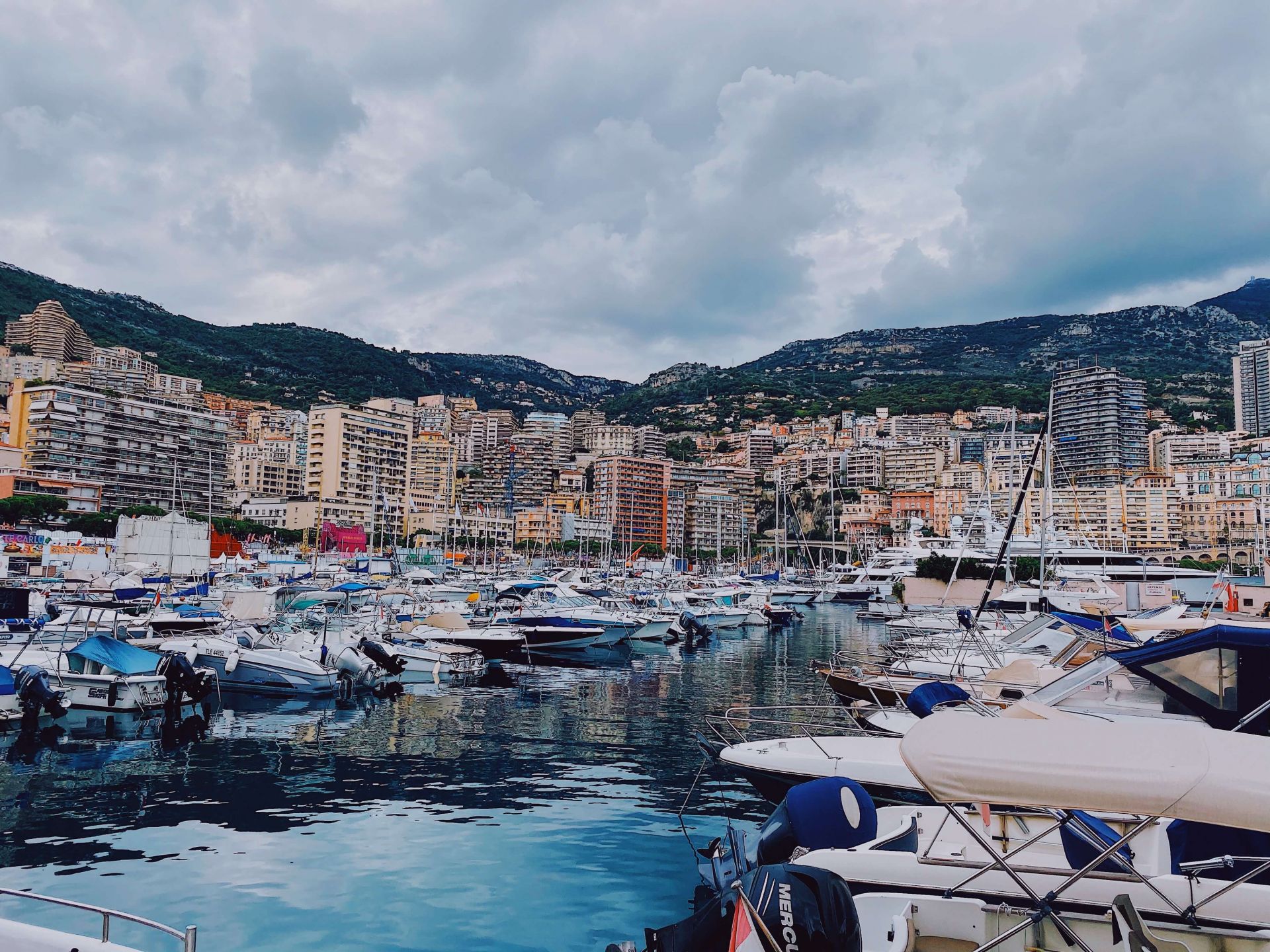 However, I do think it’s worth taking the time to walk down to the harbor front as I was only able to truly appreciated the scale of some of the boats when viewing them from sea level!

Port Hercules also acts as a sort of central divide to the state, with Monte Carlo on one side and my next Nice to Monaco day trip destination, the Rock of Monaco, on the other. The ‘Rocher de Monaco’ is a 62m tall promontory that also happens to be the oldest part of the country…

Due to its naturally protected position, it’s really no surprise that ‘The Rock’ was home to an 18th-century fortress, parts of which still remain, such as Font Antoine. Sitting right on the edge of the cliff, I’d read that this ancient structure provides breath-taking views over the Port and Monte-Carlo.

Therefore I decided to ‘hike’ up the path from Port Hercules towards Font Antoine and Monaco-Ville (the old town). And I certainly wasn’t disappointed as the views the whole way were spectacular.

The walk up to Font Antoine is quite steep in places, but it only took me around 15-minutes to reach the top, and the views made it more than worth the effort!

Close to Fort Antoine is the Musee Oceanographique, which turned out to be my favourite of all the places to visit in Monaco.

To begin with, the building itself is simply captivating. It’s dramatically located right on the edge of a cliff, and the embellishment on its facades are quite special. Since it was designed specifically to be a palace of art and science, the lavish architecture seems quite fitting! 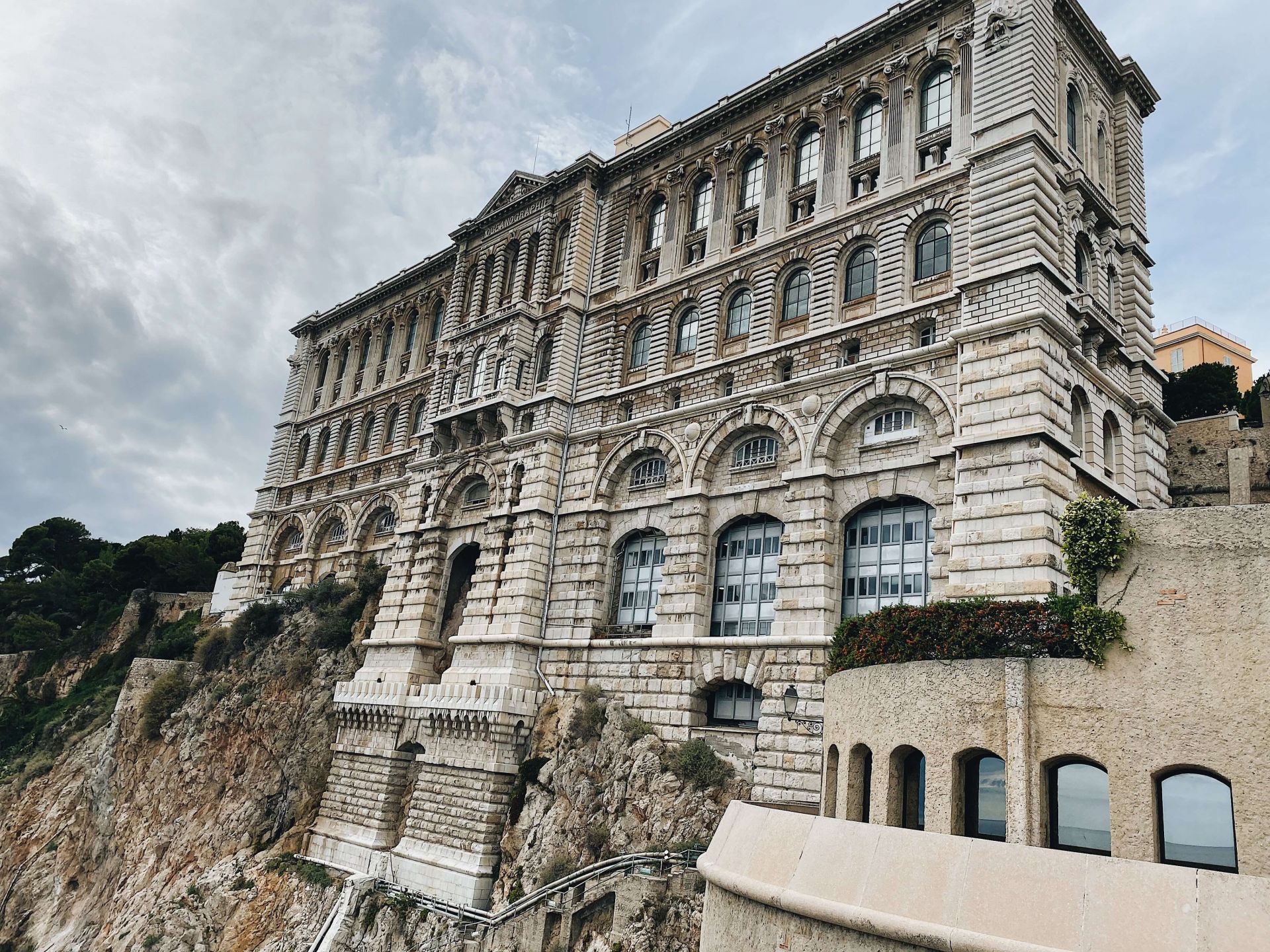 On top of this, founded by Prince Albert I, the Musee Oceanographique has become a world-renowned aquarium/museum. Now home to a dazzling 450 marine species, its centerpiece is a 6m-deep lagoon that features sharks and a charming coral reef.

However, my personal favourite attraction was the newly opened outdoor turtle tank. Because, who doesn’t love turtles, but also never has an aquarium felt more connected to the sea! 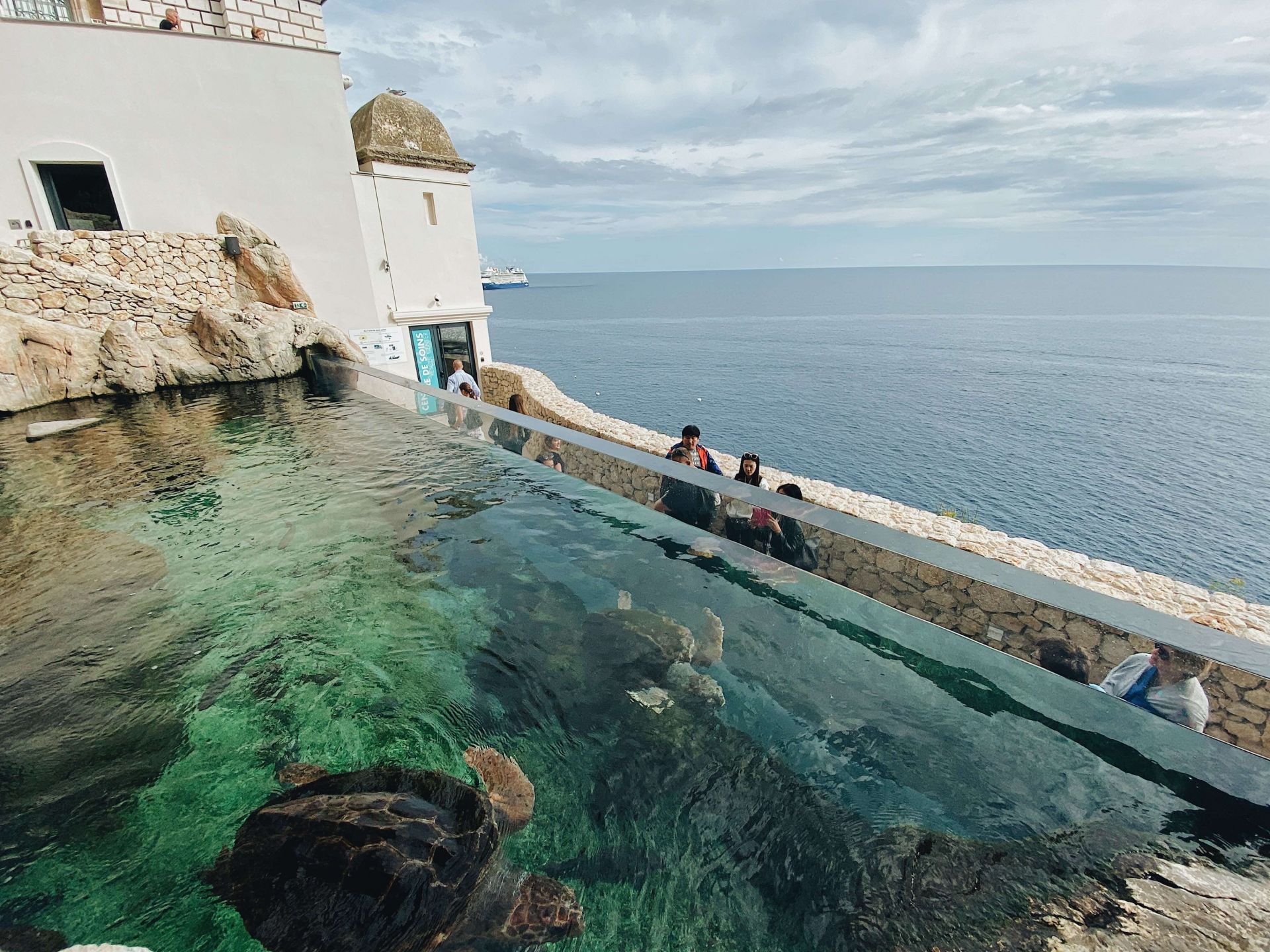 Upstairs, three huge beautiful rooms are filled with relics that depict the history of marine biology and the discoveries made by Prince Albert himself. While this wasn’t very interesting to me I still enjoyed the uniqueness of the numerous displays. 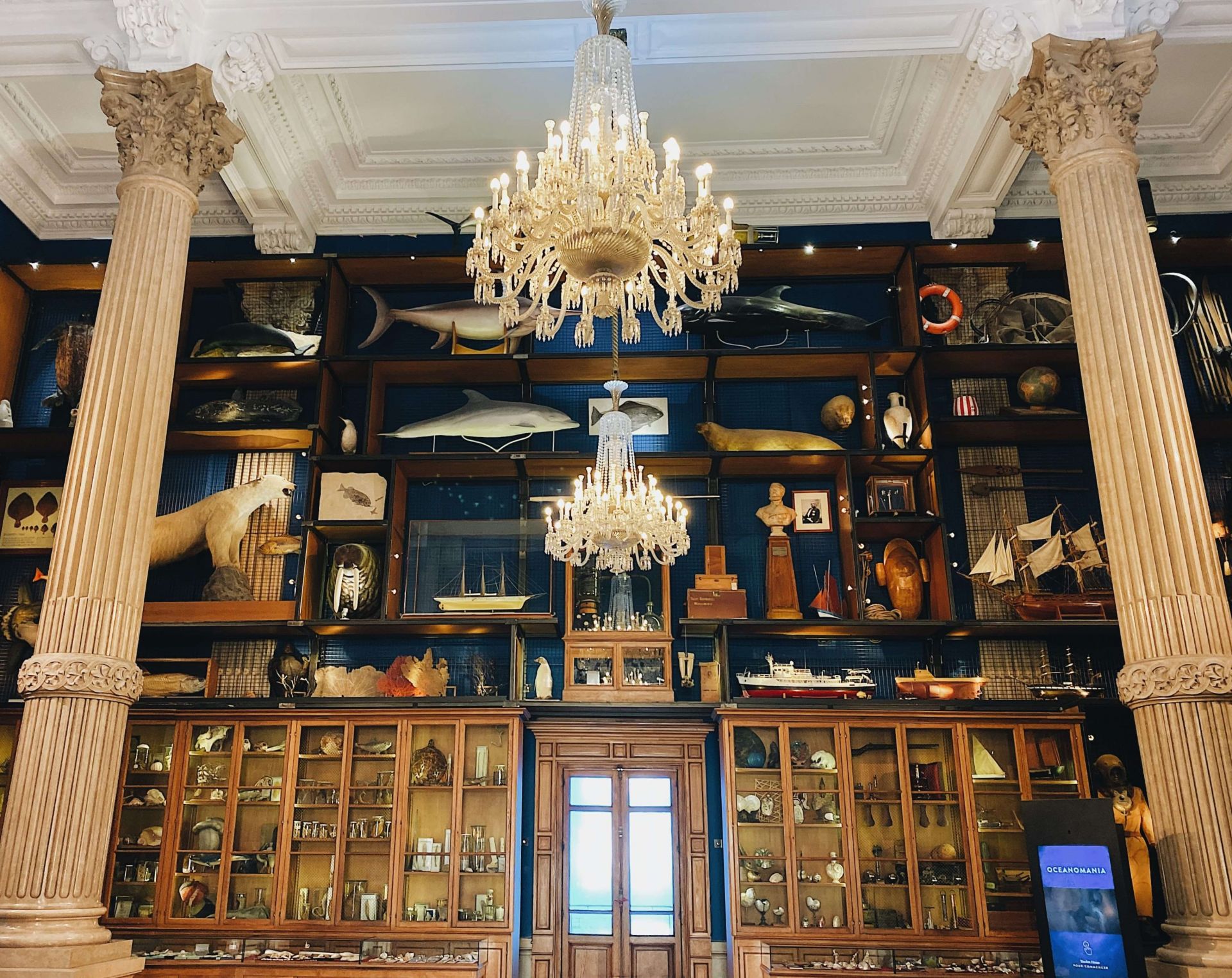 TOP TOP: If you only do one thing on your own Nice to Monaco day trip, it should be a visit to the Musee Oceanographique in my opinion! Adult tickets cost €14 but you can buy them in advance online to save a few Euros.

The garden of Saint-Martin sits on the outskirts of Monaco-Ville and it’s basically a perfectly manicured park. It’s a fantastic spot to enjoy a tranquil few minutes overlooking the coast. It’s also from here where you’ll get to see the unique perspective of the Musee Oceanographique hanging out over the cliff! 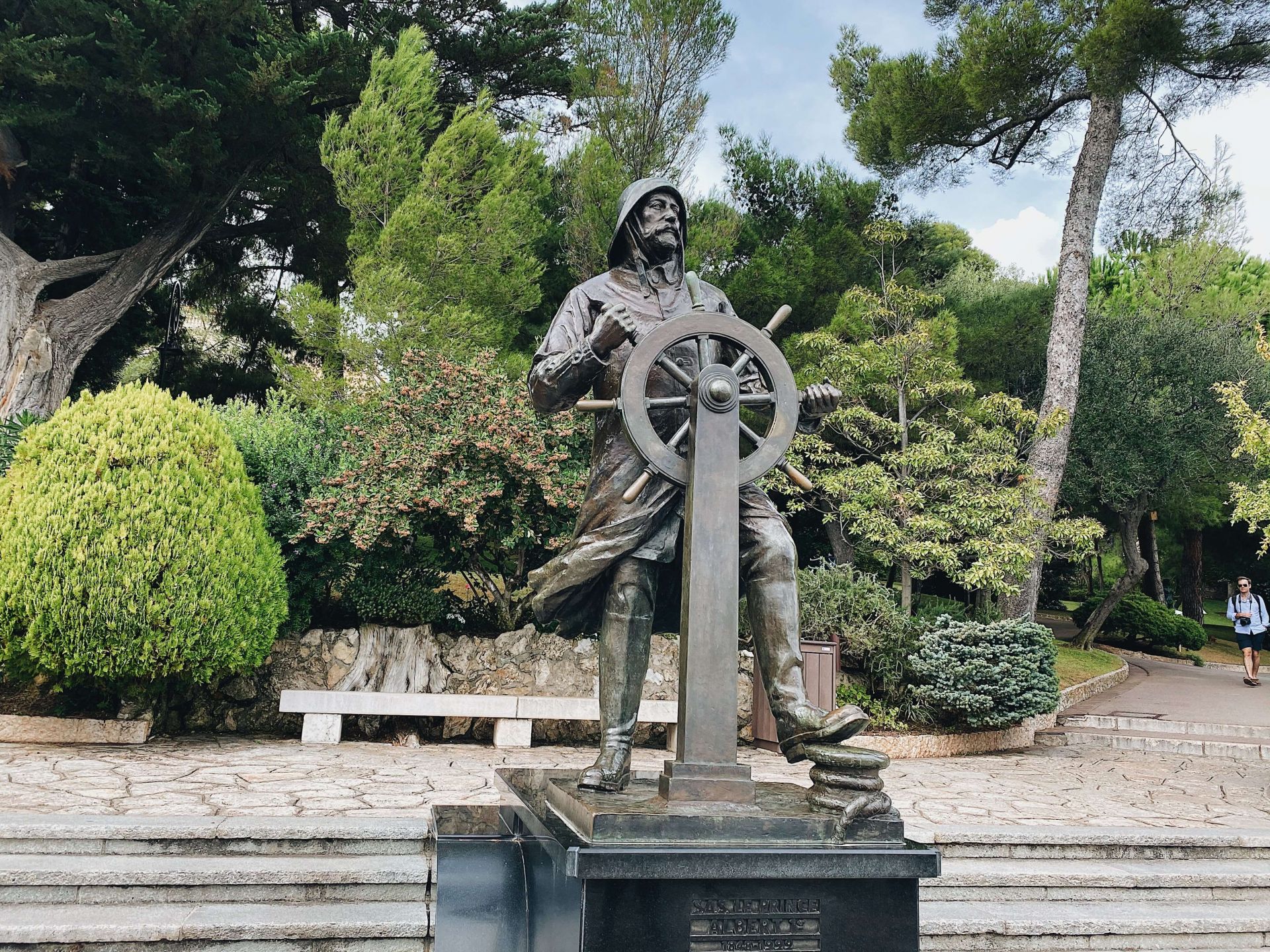 The next thing on my Monaco sightseeing list, after the Saint-Martin garden, was the Monaco Cathedral. Small but elegant, the Saint Nicholas Cathedral looks like something straight out of a princess movie… This link to royalty is, in fact, a reality as most members of the Royal Grimaldi Family are buried here, starting with Jean II (who died in 1505). 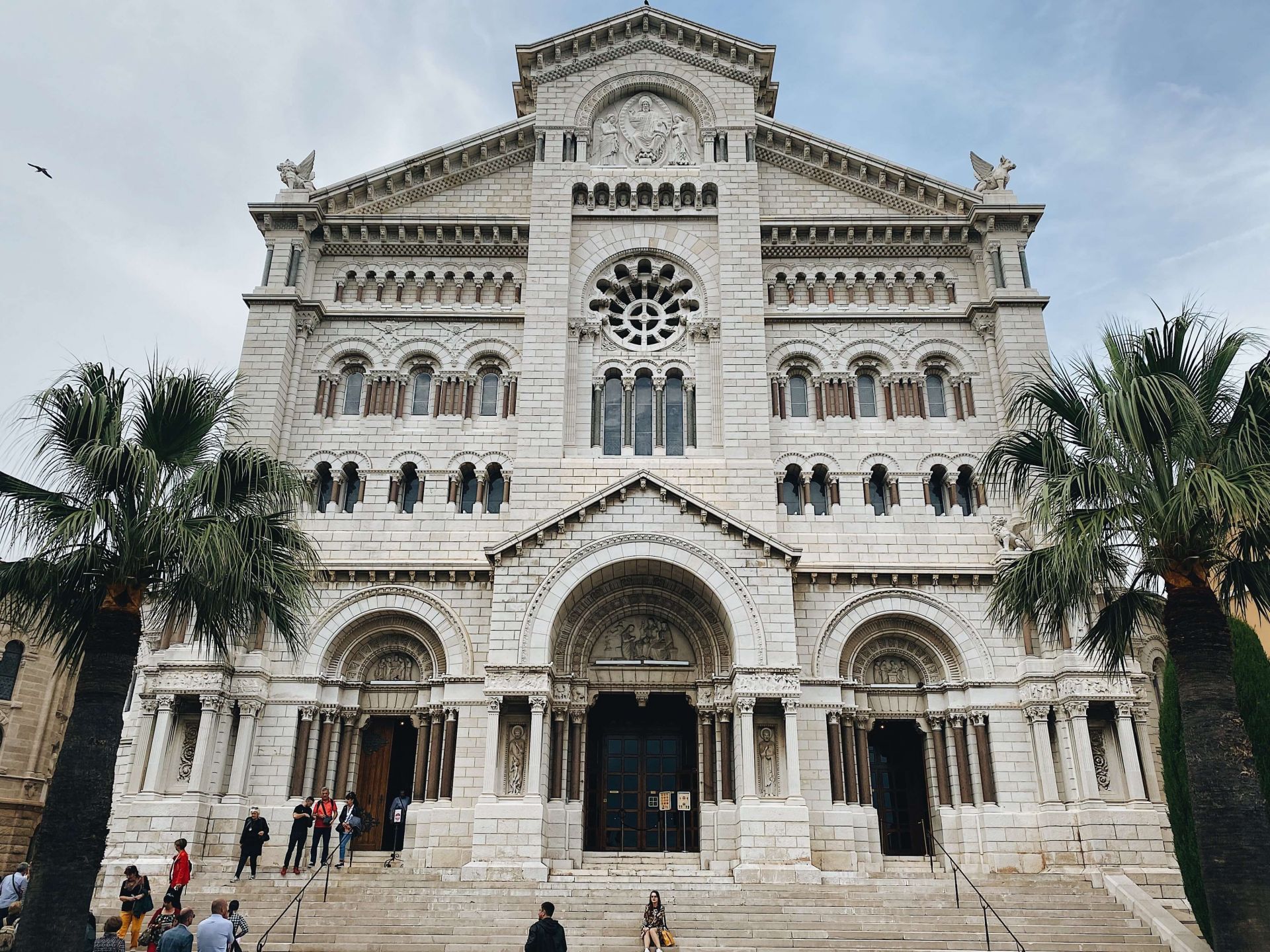 The Cathedral lies right in the heart of Monaco’s old town, therefore from there it only seemed right to explore the winding streets of Monaco-Ville. Filled with centuries-old shops and restaurants, the area is no doubt the most charming in the small country!

It didn’t take me long to wander through the warren of streets. Therefore, I opted to grab some freshly made Gelato so I could immerse myself amongst the pastel hues of the old buildings for just a little longer…

The Prince’s Palace of Monaco

The last of my places to visit in Monaco was the official residence of the royal family: the Princes Palace. It’s separated from the old town only by the impressive Place du Palais square, which is itself worth a visit thanks to the breath-taking views from Rue des Remparts, and the pretty-fronted buildings.

The Palace itself dates back to 1191, and over the centuries the sovereign Princes of Monaco have updated and expanded the Palace to what we see today. It now includes a grand Italian Renaissance style gallery, flamboyant state apartments, and an ornate columned courtyard.

Since the Royal family perfectly encompass the wealth and excess of Monaco, the Pristine Palace seemed the perfect place to end my Nice to Monaco day trip! 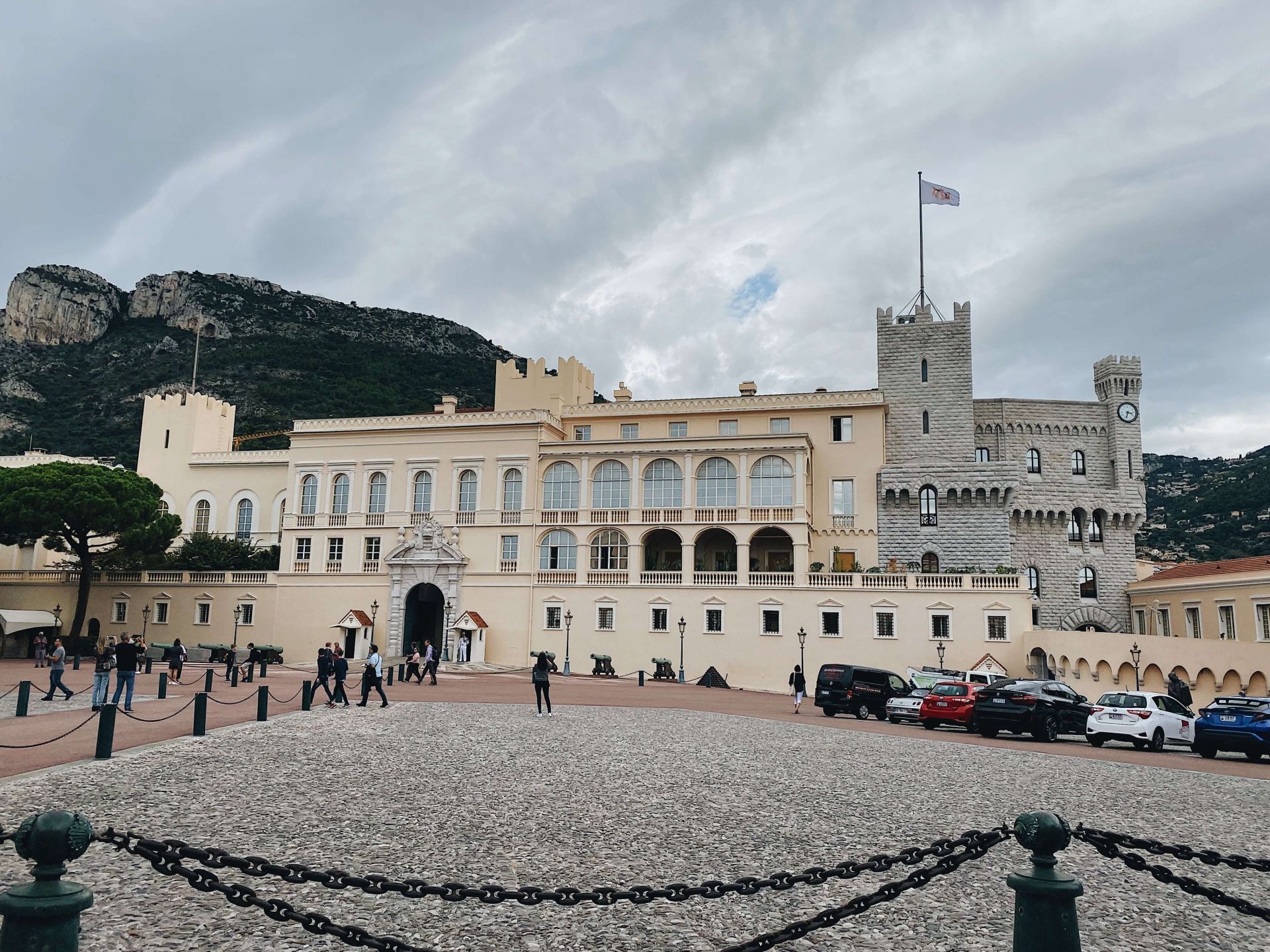 TOP TIP: You can tour the Palace’s fabulous state apartments (when the Prince isn’t home) for €10 during the summer months. It’s usually open from the start of April until the end of October, but check the official website for confirmed dates!

Other Things to do on a Nice to Monaco Day Trip –

My Nice to Monaco day trip itinerary allowed me to see the very best of the Principality. However, what makes Monaco one of the best day trips from Nice is the variety!

For example, on your own trip, you could choose to spend more time in Monte-Carlo visiting attractions such as the famous Café de Paris. Or you could dedicate your day to the country’s green spaces… The Princess Grace Rose Garden, the Japanese Garden, and the Jardin Exotique de Monaco are all supposedly well worth a visit! 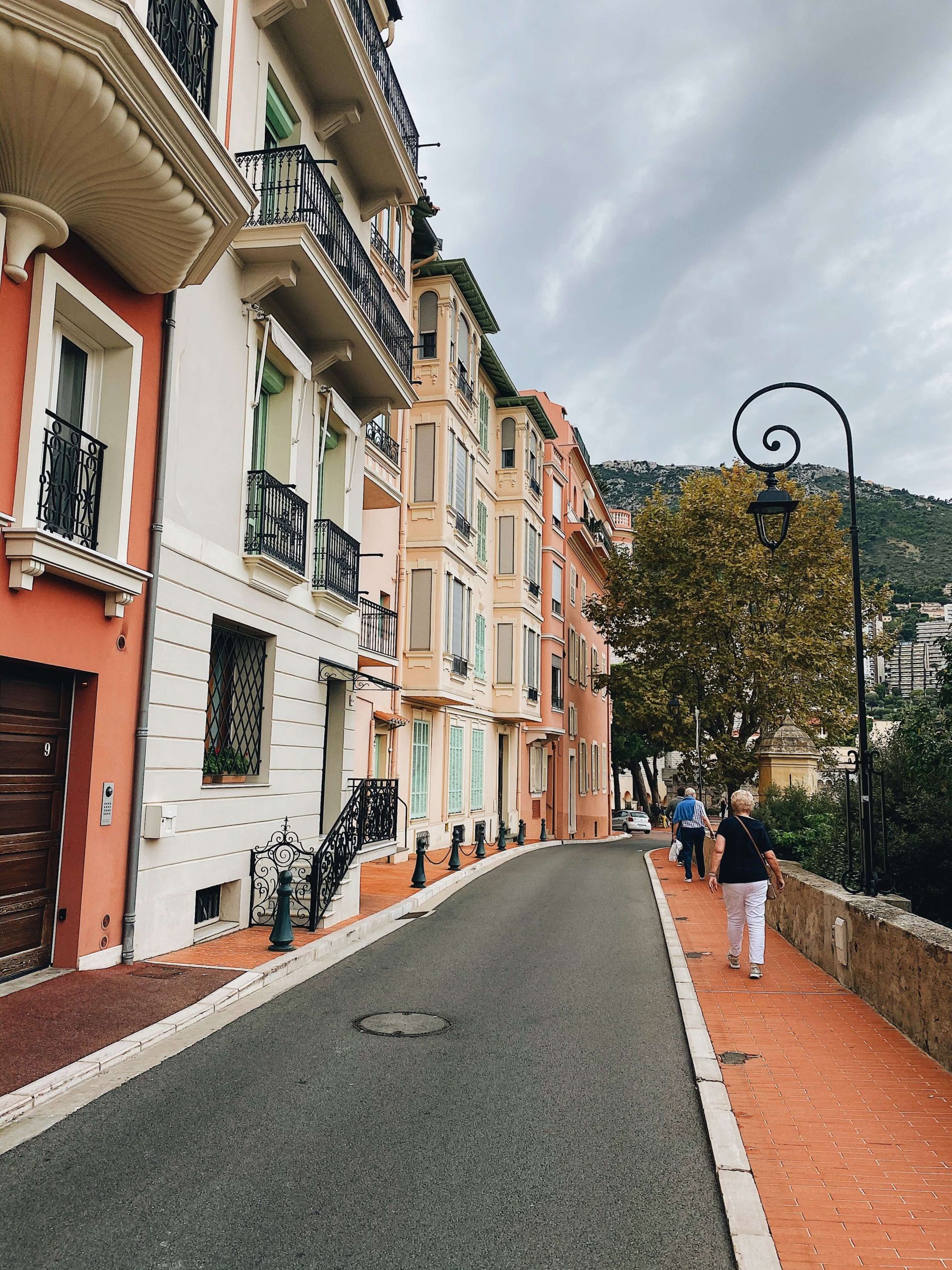 So while my itinerary was perfect for me, you may want to add/swap some of the places to visit in Monaco to suit your preferences.

Travel from Nice to Monaco –

By now you should be sold on a Nice to Monaco day trip, but you may be wondering the best way to get there. Thankfully there are plenty of options when it comes to travel from Nice to Monaco.

For example, if you wanted to relish in the true extravagance of Monaco, a helicopter is a great option… But as this will set you back at least €150, here are the three more ‘mainstream’ methods:

At around €4 each way, the train is an easy and affordable way to get to Monaco. Nice’s main station (Gare de Nice Ville) is a short walk from the city center, and a direct train to Monte Carlo conveniently leaves every half an hour.

Unfortunately, France was experiencing a national train strike on the day of my trip, so I went for ‘plan B’ and booked an Uber to take me to Monaco.

The average cost of an Uber from Nice to Monaco is around €40-60. I found this to be a pretty fair price (and much cheaper than the city taxi’s which quoted me €90).

However, you should note that Uber does not operate within Monaco itself. So, if you want to use the same transport method to get back to Nice make sure you get your driver’s number!

Finally, you could opt to take the Nice to Monaco Bus. But, while the 100E Bus directly links the two destinations I found it extremely difficult to find reliable information about the journey. At the time of my trip, this timetable seemed to be accurate, but finding the exact location of the bus stops is basically trial and error…

Top Tip: I decided to get the bus back from Monaco myself and eventually found a bus-stop near the Monte Carlo Casino. Simply follow the road/park opposite the Casino uphill and you’ll hopefully find the bus-stop next to the first row of shops.

Now you know how to get to Monaco, my ultimate Nice to Monaco day trip itinerary or guide is complete! As you can see from this post I really enjoyed my time in the Principality, there’s just something so perfect about its pristine streets and glamour!

Want to explore more of the French Riveria? Why not spend one day in Nice France?!

Your guide to visiting all the beautiful places in Monaco in one day! The cities highlights include Monte Carlo and the palace…. In other words, this post is sure to spark your wanderlust and help you discover the best things to do in Monaco!#Travel #Monaco #Wanderlust #Luxury

All the best things to do in Monaco on a day trip from Nice France! Travel in style and luxury and enjoy the landscape and aesthetic of one of the most beautiful places in Europe! From the Monte Carlo Casino to the Palace of the Royal Family… Click to read more! #Monaco #Travel #France #Luxury
Tweet
Pin
Share
3K Shares