Day trips from Seville options are plentiful! For example, you could visit the wonderful towns of Granada and Córdoba, or even travel over the Strait of Gibraltar to Tangier in Morocco.  However, I decided to take a Seville to Ronda Day trip, as after spending three days in the city I fancied the idea of exploring rural Ronda and the Andalusian countrysides other famous White Villages along the way…

READ HOW I SPENT MY TIME IN SEVILLE.

What are the White Villages –

Mainly located within the Sierra de Grazalema Natural Park, Andalusia’s White Villages (or Pueblos Blancos in Spanish) are historic hill towns which offer authentic culture and breathtaking views… Characterised, as their names would suggest, by charming whitewashed walls, travelling between them makes for the perfect Andalucia Road Trip! 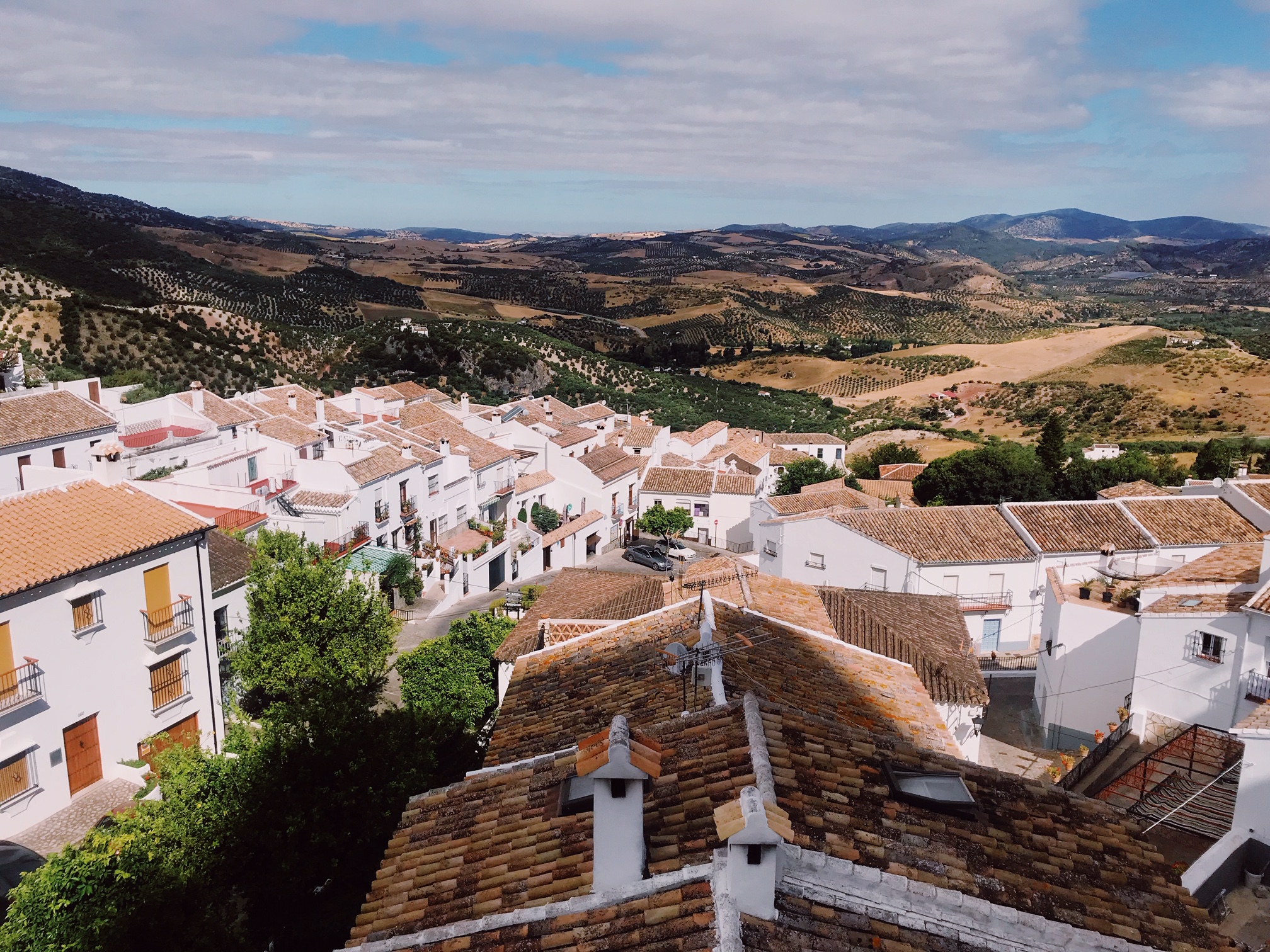 So, if you like picturesque villages with endearing locals, then the Pueblos Blancos are for you…  However, you’d actually need several days to explore and discover all the White Villages! Thus, if (like me) you only have one day to spare, most people tend to visit the villages of  Zahara de la Sierra and Grazalema as they’re on the way to Ronda, the largest of the ‘villages’.

While Ronda is also technically one of the White Villages, it’s a much larger town with a more modern, tourist vibe. In fact, Ronda is the third most-visited destination in southern Spain!

This said, Ronda has retained much of its historic charm, particularly in the old town, which is famous for its dramatic views, and deep gorge that divides the town into two halves. Because of this, there are lots of unique things to do, which makes it the perfect focal point of a Seville day trip, especially since it’s only around 1 h 30 mins away from the city. 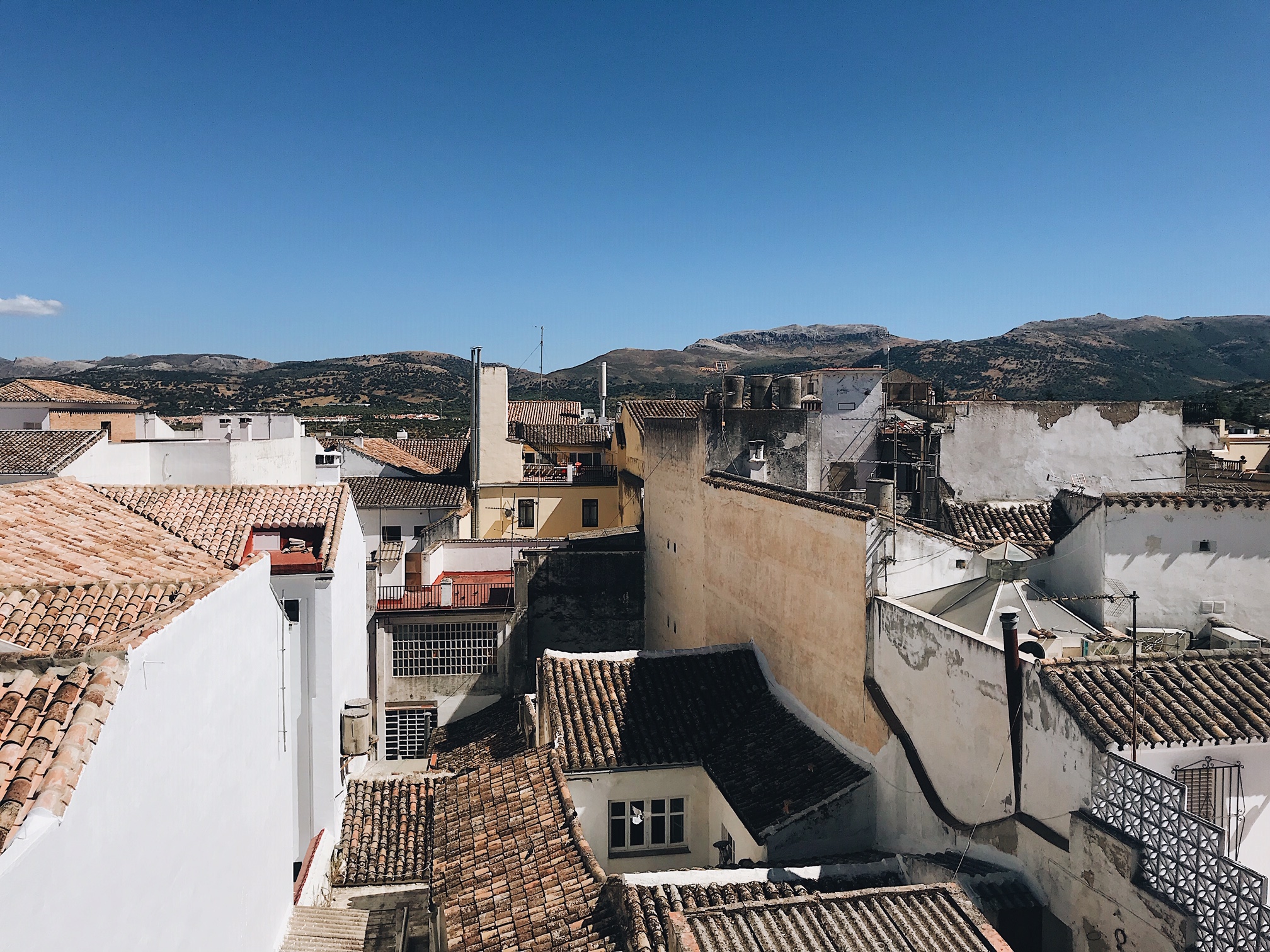 How To Get From Seville to Ronda –

There are several companies which offer organised day trips from Seville to Ronda, such as this one from GetYourGuide. However, based on personal experience I’d suggest either hiring a personal driver or your own car. This way you can explore each of the villages on the way to Ronda at your own pace and be in charge of timings and the things you do!

So now I’ve sold you on the beauty of the Pueblos Blancos, let’s get into how you can make the most of a White Villages tour from Seville!

The key to all Seville day trips is an early start! I left the city at around 8am to make the most of my time in the White Villages… In this way, my first stop of the day was Zahara de la Sierra, which is located about 1 h 20 mins from Seville.

While the drive is a little long, the views along the way are magnificent as the landscape turns from flat farmland to the unmistakable beauty of the Grazalema Natural Park. I  lost track of the number of times I pulled over to take photos! 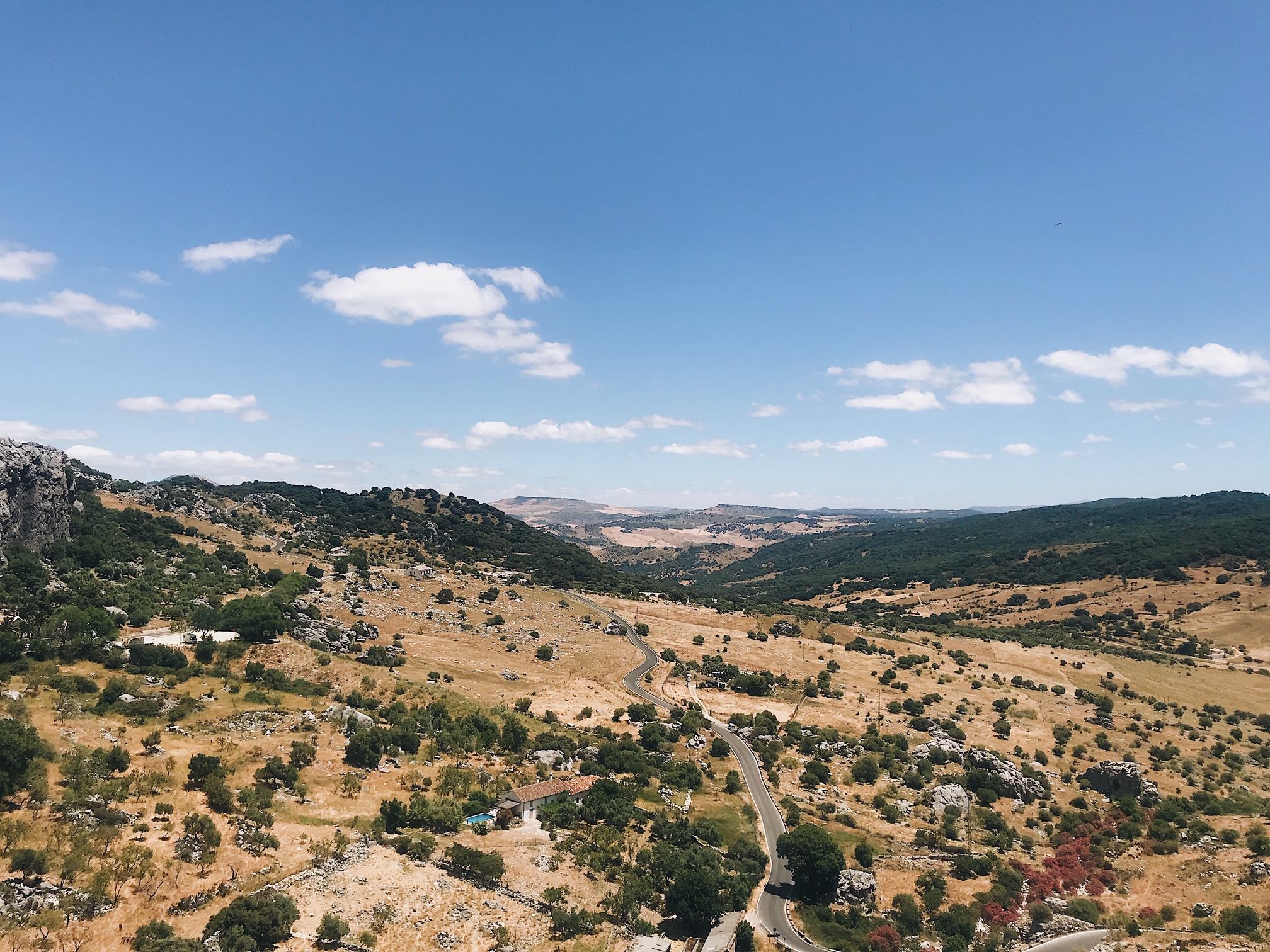 Beautiful views of the national park

More than this, perched on top of a mountain, Zahara de la Sierra really is a sight to behold when it finally comes into view. And, as if the charming white houses aren’t enough, the Zahara-El Gastor Reservoir sits directly below the village, framing the landscape and making it even more picturesque. 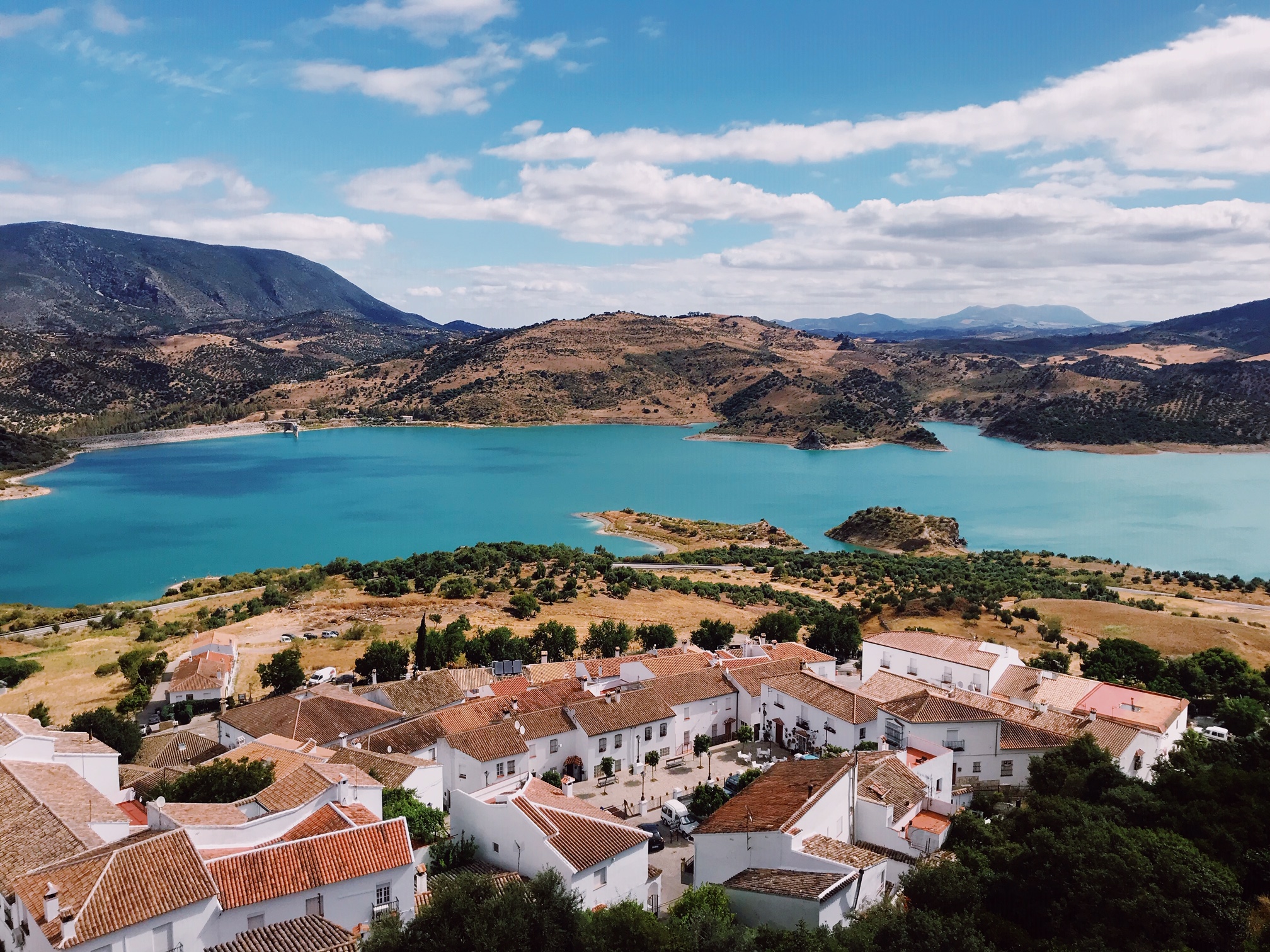 views of the Zahara-El Gastor Reservoir

Another perk of leaving at 8am was the fact that I arrived at Zahara de la Sierra in time for an authentic Andalucian breakfast. The local food in the white villages is just another reason why they’re one of the best day tours from Seville!

After enjoying a leisurely breakfast with a glass of local fresh orange juice, I wandered through the villages charming white streets and was amazed by the unbeatable views around every corner. Whether they looked down over the lake or the orange roofs of lower houses, they were spectacular! 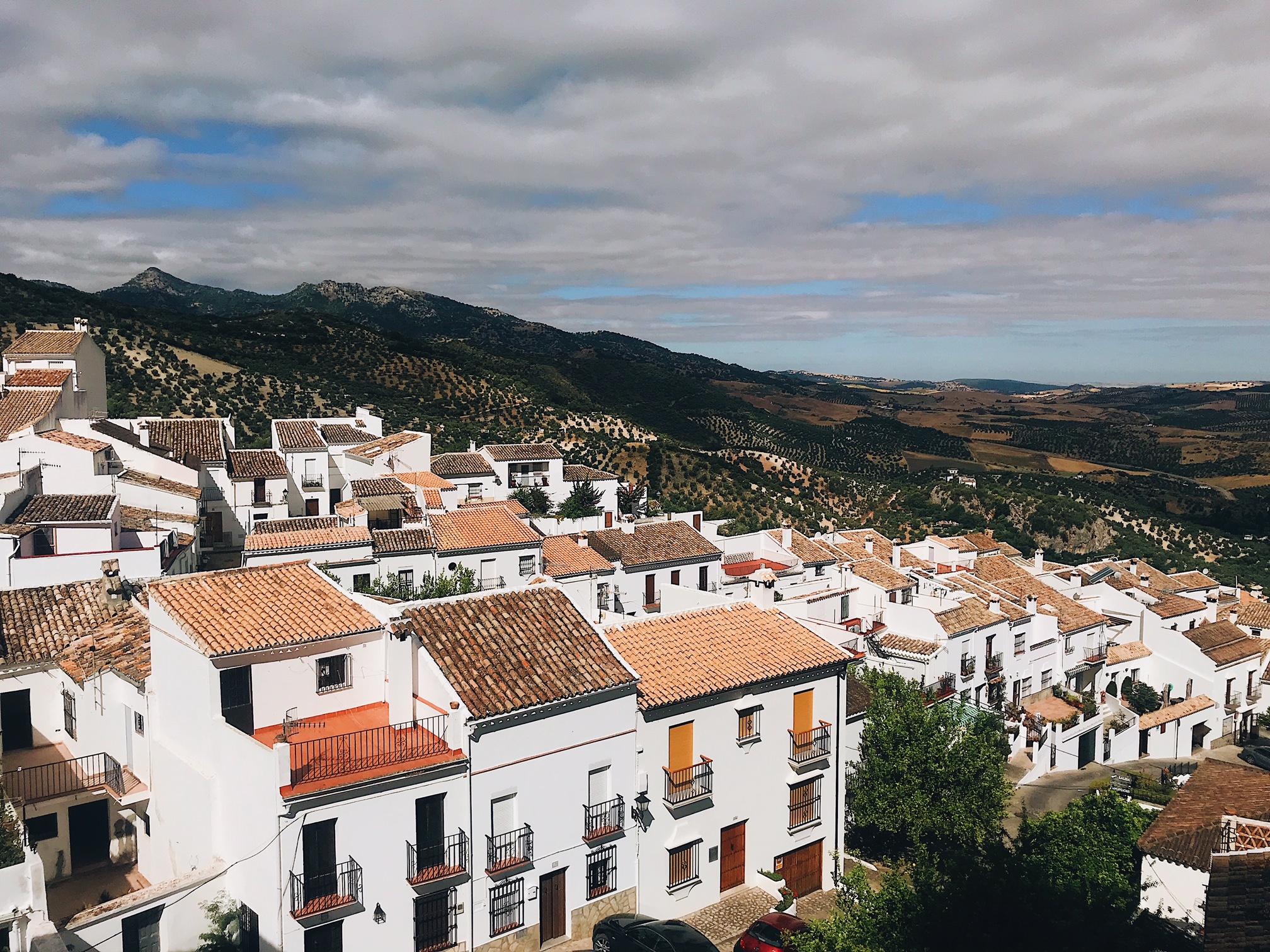 TOP TIP: Head into the centre of the village for a fantastic courtyard viewpoint over the whole village and the mountains beyond!

In addition, if you’re feeling adventurous, you can also hike up to the top of the village to Zahara de la Sierra’s Castle, which dates back to the 14th century. Although the ruins are small, the spectacular views of the surrounding countryside makes the walk up more than worthwhile.

11am Drive to Grazalema –

Grazalema is a short 30-minute drive from Zahara de la Sierra. Located deeper within the national park the views only get better as you drive closer to the village and the foothills of the Sierra del Pinar mountain range. 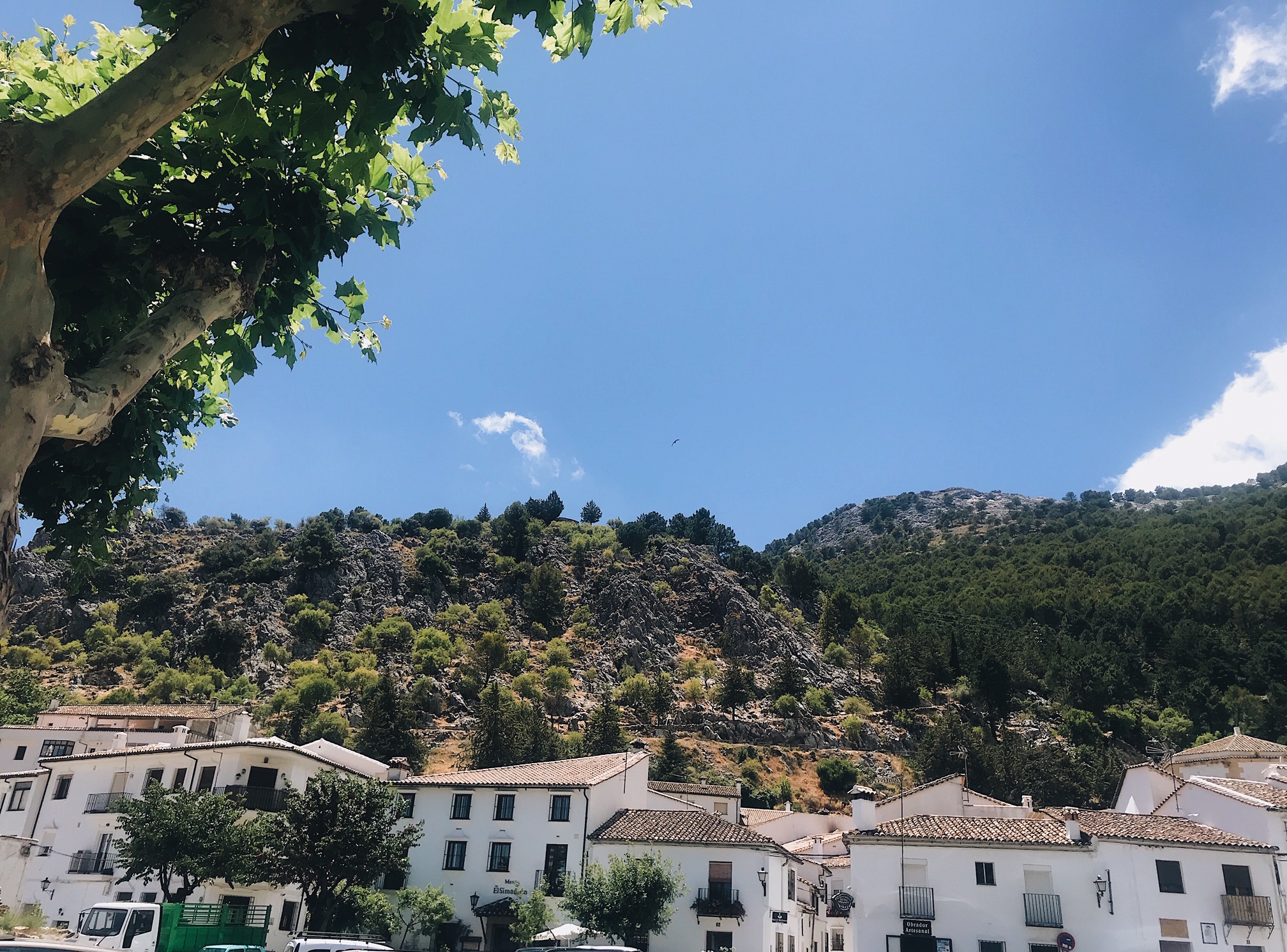 Situated at over 800m in a high valley, Grazalema is framed on all sides by glorious mountains. More than this, it’s actually been voted the best preserved of the White Villages thanks to locals careful maintenance and respect for the original layout.

This makes a stroll through the narrow cobbled streets feel like stepping back in time! The houses here are also decorated with hanging geraniums and bougainvillaeas, which are a real delight!

Further, I loved the villages ancient church as it hints towards Andalucicas Moorish past… The Church of Our Lady of Aurora, as it’s known by locals, was originally a Mosque, and you can still see the buildings original dome hiding behind the catholic façade! 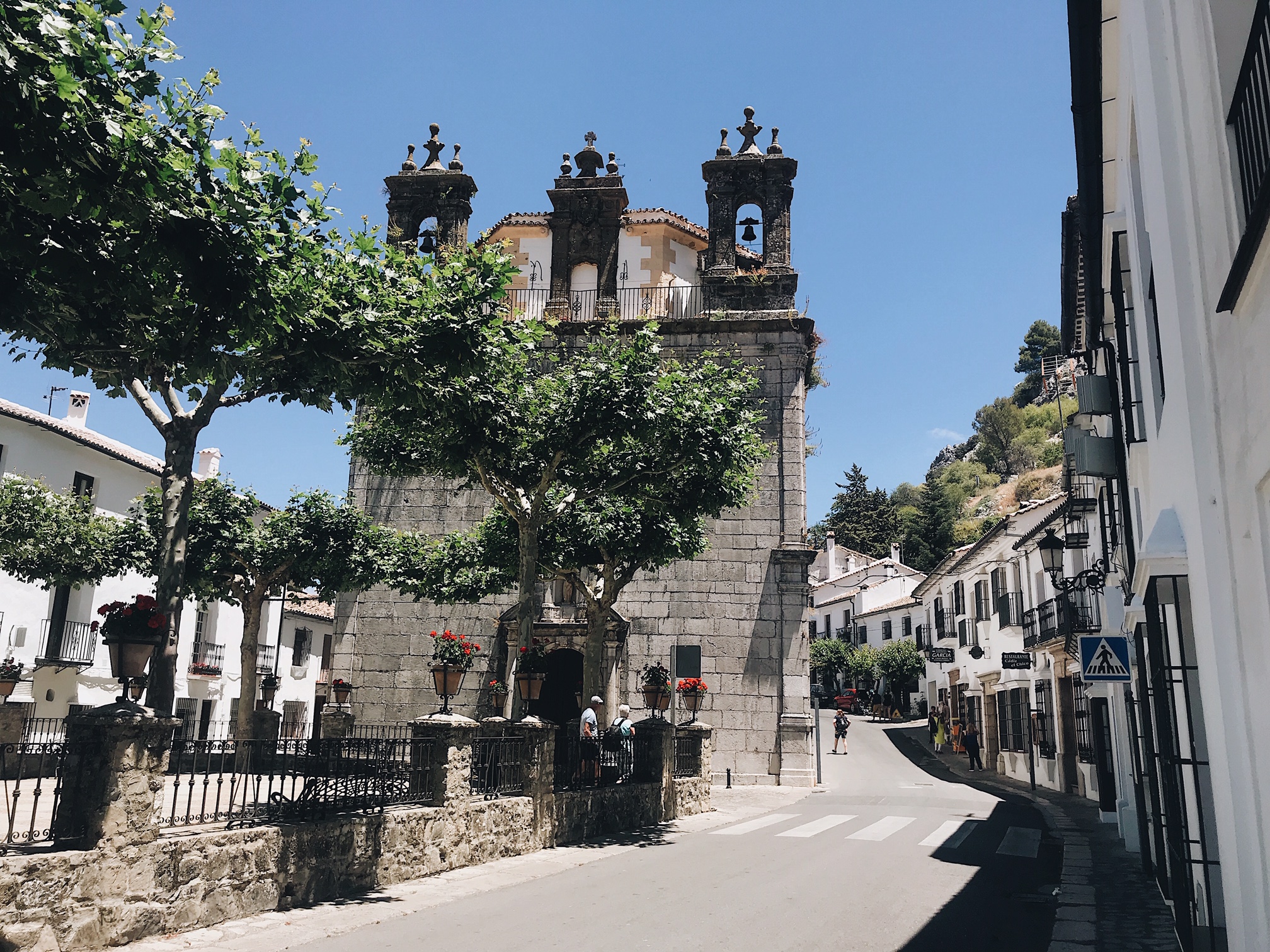 Yet again, the food in this hilltop haven is also divine, and there’s no better place to stop for lunch before you head onto the final stop of the day…

Midday is the perfect time to head to Ronda, which is another 30-minute drive away, as it means you’ll get a whole half-day to explore the town on this ultimate Ronda day trip!

As soon as I arrived in Ronda I made a beeline for the attraction that makes the town so iconic: the epic Puente Nuevo, or New Bridge. It spans across the 328 feet deep El Tajo gorge, connecting the two halves of the town. Despite its misleading name, the bridge was completed in 1793, making it over 300 years old. 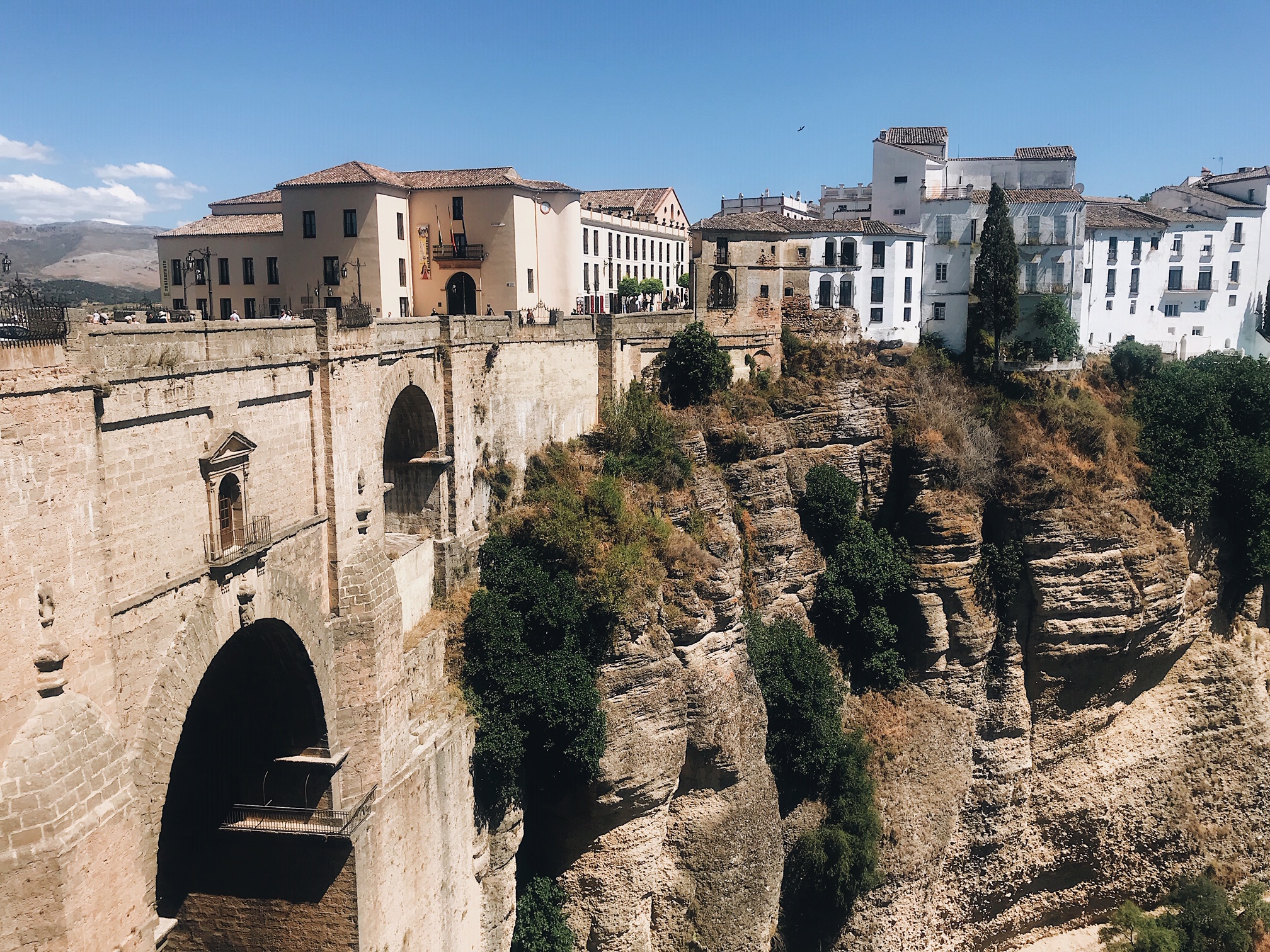 The Puente Nuevo really is a sight to behold, as its sheer scale is such an impressive feat of engineering! But at the same time, the bridge has a sort of elegance to it, giving you the sense that it was always meant to be there.

I’d highly suggest hiking the short trail (located in the old Moorish side of Ronda) down to the bottom of the Gorge, where you’ll get to view the bridge in all its glory! 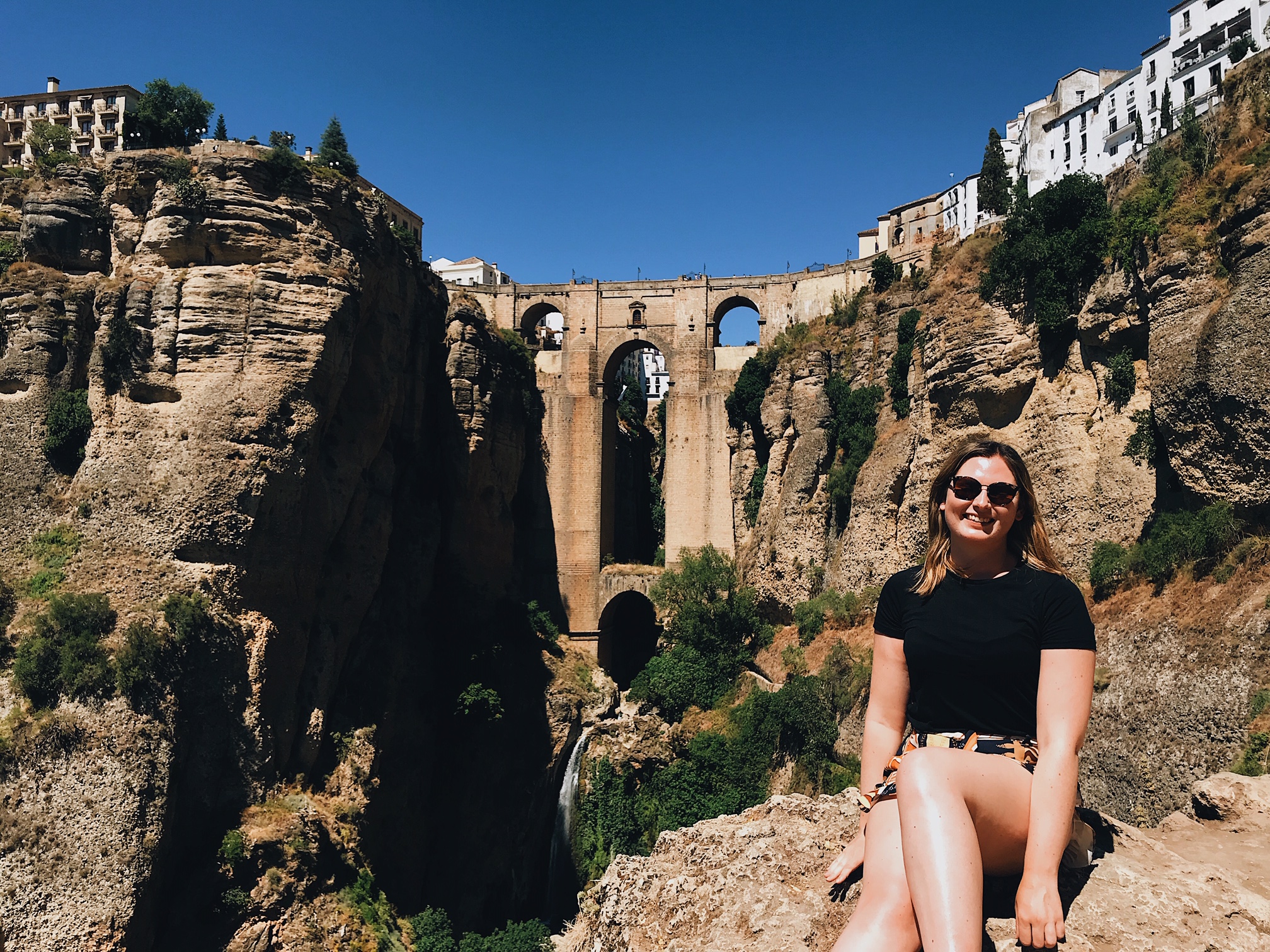 The New Bridge from the bottom of the gorge

However, while the New Bridge is undoubtedly what makes this Seville to Ronda day trip so epic, this doesn’t mean that you should forget about other Ronda attractions during your time in the town.

For example, you could visit the historic bullring which opened in 1785. While I’m usually against such attractions in other parts of Spain, Ronda’s bullring is only used once a year and so its more of a museum dedicated to the historic bullfighting of the 18th century, making a visit very interesting! 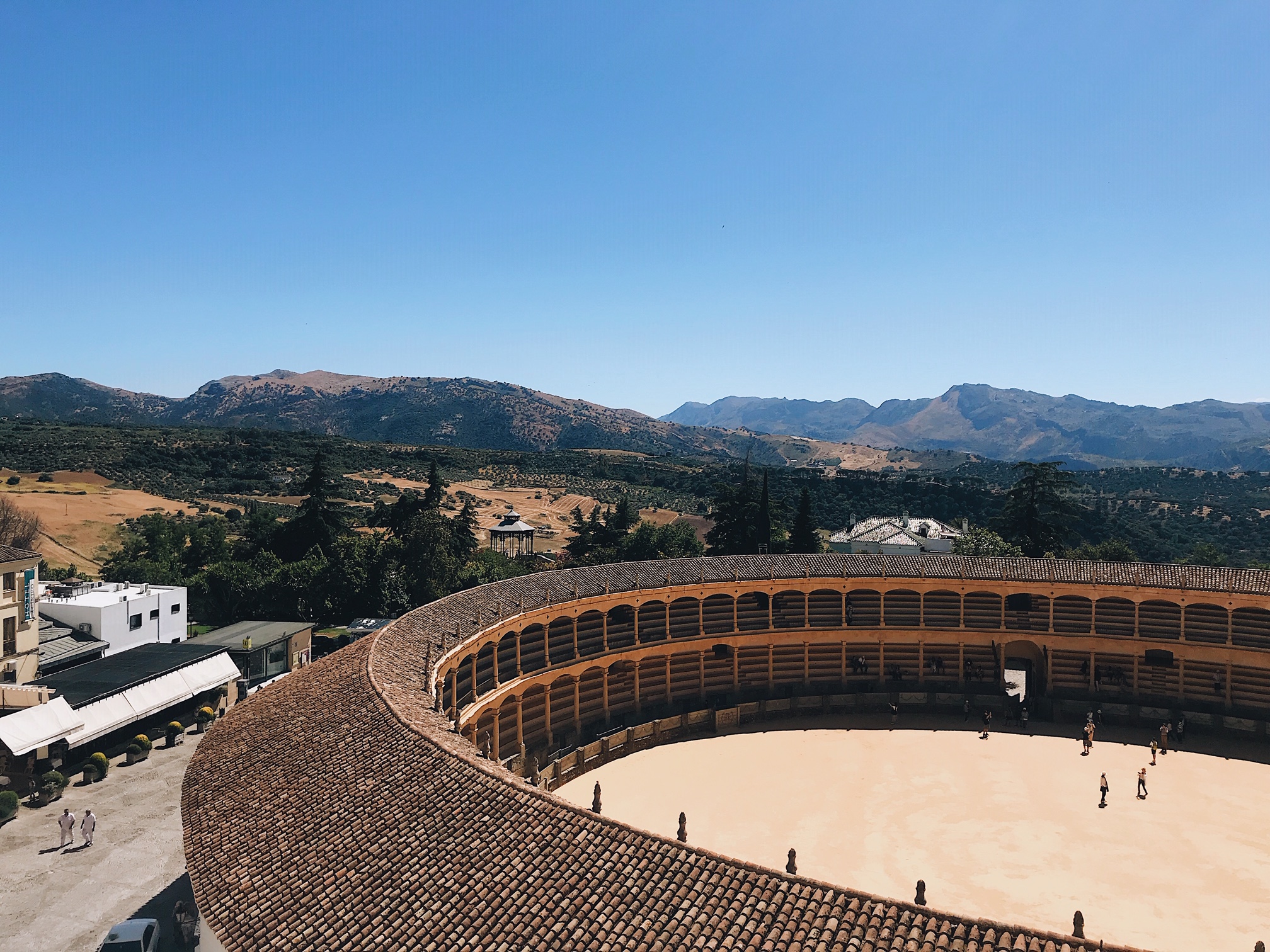 TOP TIP: if you’re interested in the bullring but don’t have time to visit, you can always take a quick trip up to the rooftop terrace of Hotel Catalonia Ronda. From here you’ll be able to see down onto the Bullring, seeing most of what it has to offer for free. 🙂

Other highlights worth visiting on your Ronda day trip include the Baños Arabes (Arabic Baths) which are among the best-preserved in Spain, and the Jardines de Cuenca, a set of beautiful garden terraces that look onto the New Bridge.

Speaking of views, those from dramatic balconies dotted around the town are quite amazing and more than worth a visit! 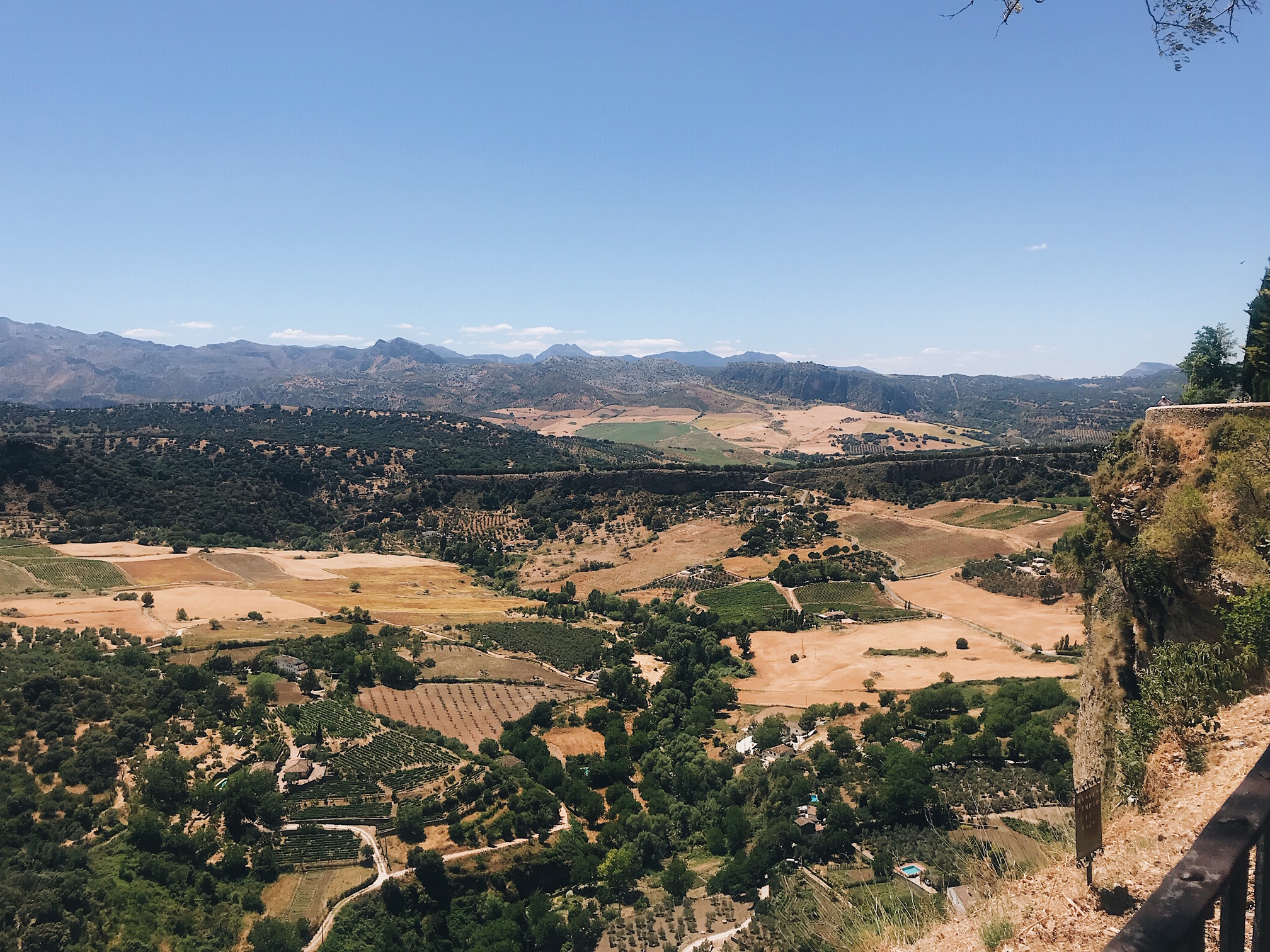 Other than this, I simply enjoyed wandering through Ronda’s charming streets, which are just as pretty as the other White Villages. I’d also highly suggest sitting down for some refreshing Gelato! Which will be well deserved after a solid day of exploring.

7pm: Head back from Ronda to Seville –

I left Ronda around 7pm after a good few hours of exploring. You can take a more direct route back from Ronda to Seville, bypassing the Sierra de Grazalema Natural Park, which makes the return journey much quicker at around 1 h 30 mins. 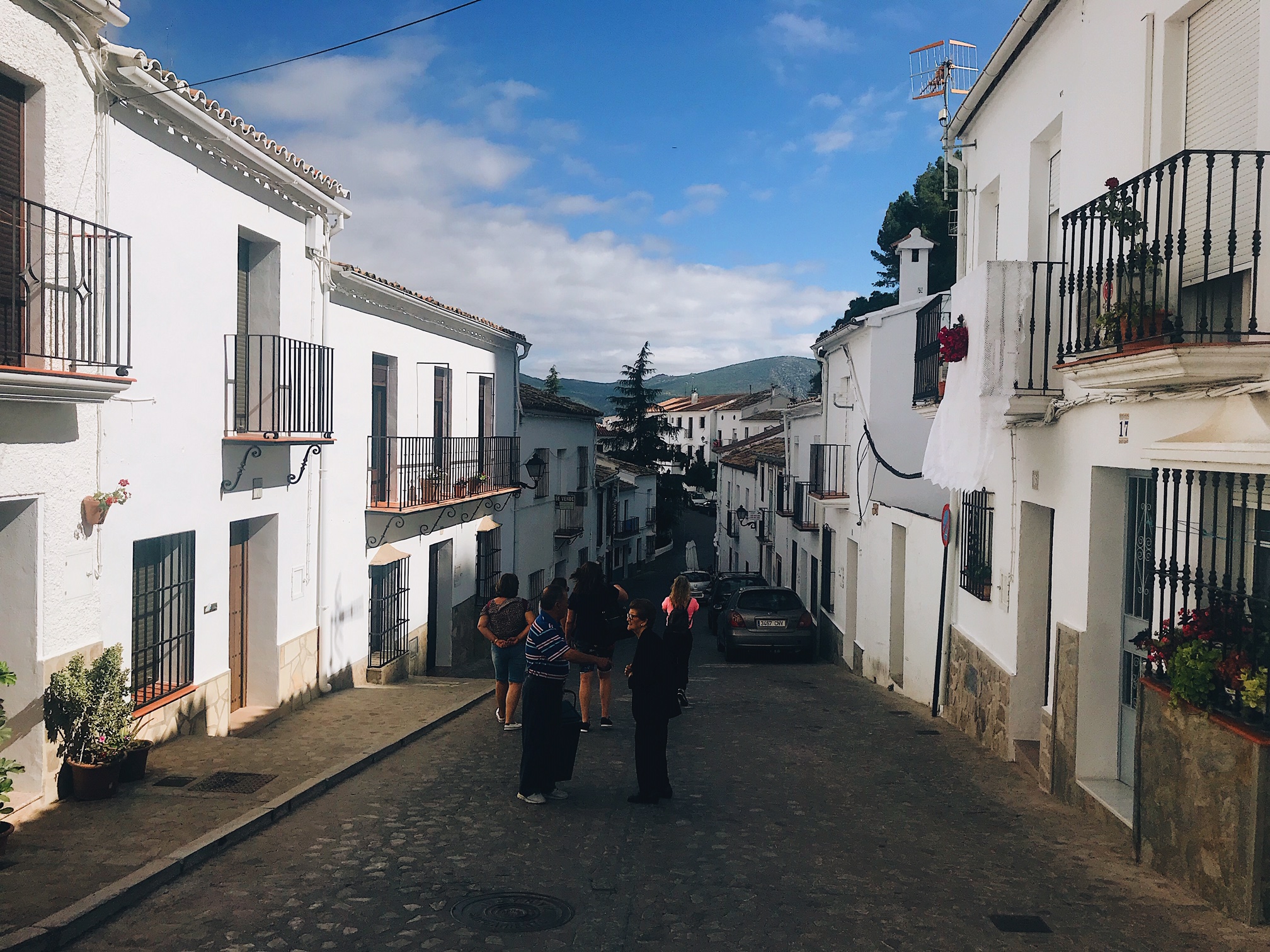 Arriving back in Seville marked the end of my Seville to Ronda day trip. However, with hindsight, I could have easily spent another day in Ronda and the surrounding area, so I’d highly recommend thinking of taking a longer road trip through the Pueblos Blancos if you have the time!

Sadly for me, I had to return to Seville for my flight home the next day, so a day trip was all I could squeeze in… But a little taste of Andalusia’s White Villages is better than nothing! And I’d say it is one of the best day trips from Seville Spain!

A guide to the things to do in Ronda Spain on a day trip from Seville! Highlights include seeing the stunning New Bridge #Ronda #Travel #Spain

There are loads of Seville day trips you could take! But the best one is Seville to Ronda, one of Andalucia’s stunning white villages (Pueblos Blancos). This post is all about the things to do in Ronda Spain on such a day trip! #Spain #Ronda #Seville #Travel
Tweet
Pin
Share
208 Shares