Close to the Italian border and right on the edge of the French Riviera, Menton is a charming seaside town that offers wonderful food, a fantastic museum, and plenty of beautiful pastel buildings. You can read about these amazing things to do in Menton (and more) below… And I highly suggest that you do, because after my own Menton day trip I believe it’s one-stop on the Côte d’Azur that you can’t afford to miss!

Top Things To Do In Menton France-

You’ll probably arrive in Menton by train. I found it’s best to head straight from the station to the glorious nearby Promenade du Soleil.  Stretching about 2km along the seafront, this charming street is flanked on one side by several grey pebbled beaches, similar to the ones found in Nice.

On the other side of the Promenade, there are countless restaurants, many of which are famed for their seafood! Marked by Italian influences, the food overall in Menton is fantastic. So, on my own Menton day trip, I made sure to reach the town just in time for lunch!

The end of Promenade du Soleil is marked by the Musee du Bastion, which is another must-see attraction when you visit Menton France!

While personally not my sort of thing, when asked, what to do in Menton France? Many will suggest a visit to this small but interesting museum! It’s dedicated to the works of Jean Cocteau, who was one of the most famous multi-talented artists of the 20th century.

Cocteau actually has a fascinating link to Menton, and he was involved in the restoration of the Bastion, making the museum a fitting dedication to his work. 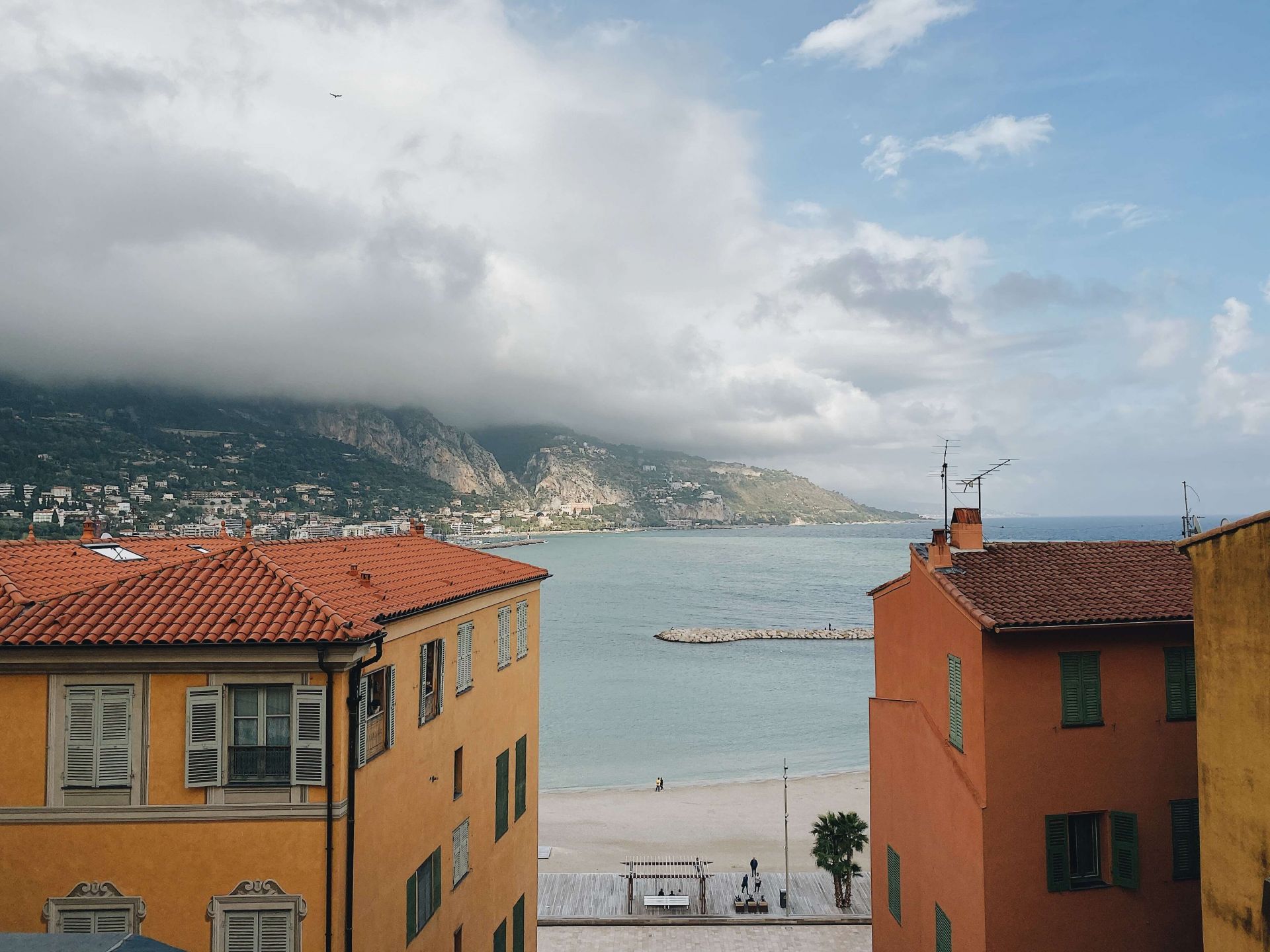 The town’s port (Vieux Port De Menton) is located just around the corner from the historic bastion. Mainly home to small fishing boats, the harbour is a peaceful part of this sleepy town, and a lovely place to simply wander around.

However, the views the port provides of Menton’s old town is the real star of the show… 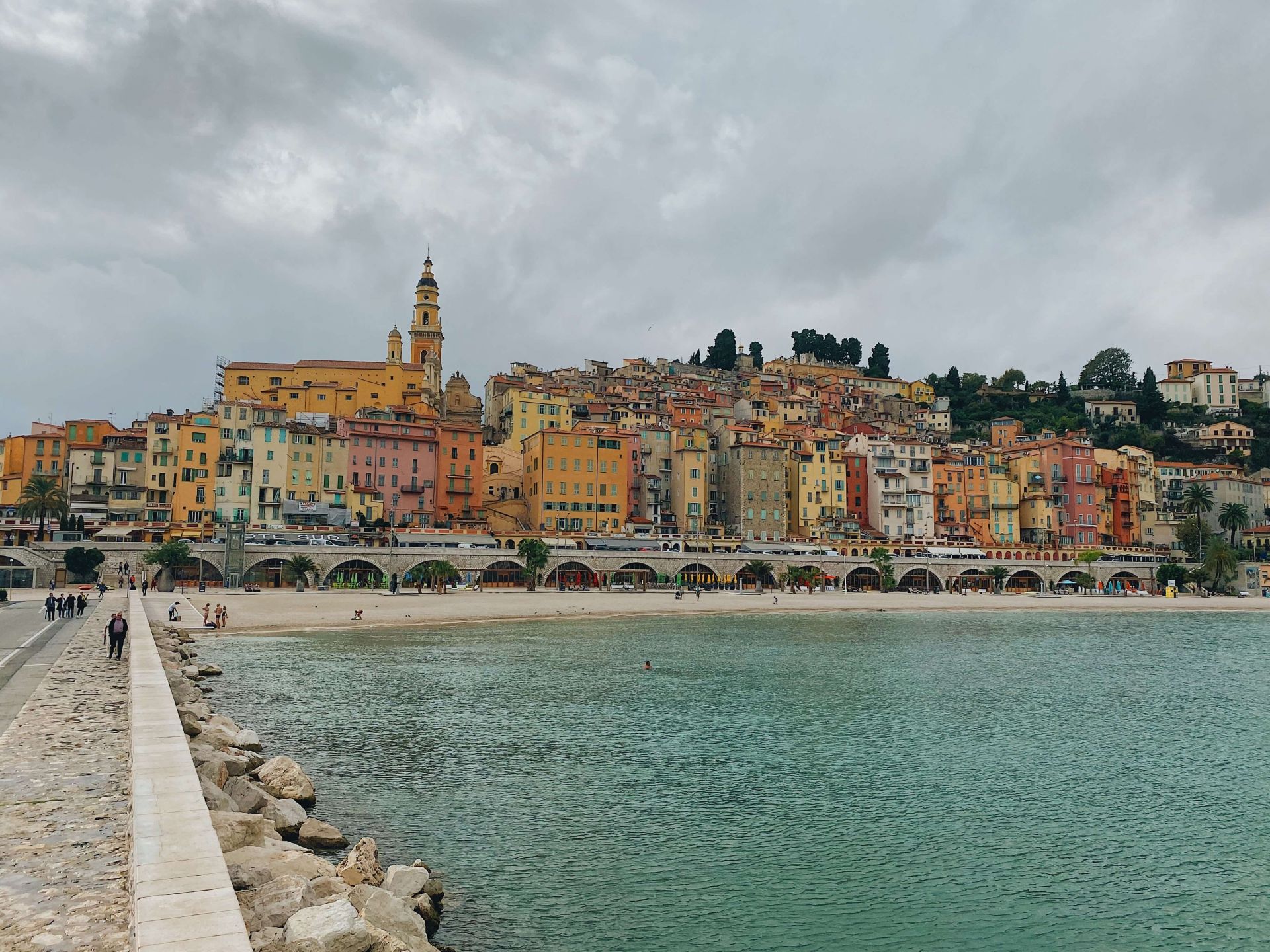 With architecture similar to Cinque Terre, the pastel-coloured buildings have a very charming Italian feel. What’s more, they cascade down the hillside onto the sandy shores of Plage Sablettes (which is also no doubt the best Menton Beach).

I could have easily spent my whole day in Menton basking in the sun on Plage Sablettes… After all the beach’s facilities are excellent. For example, it backs onto several wonderful restaurants/gelaterias, and even has modern shower rooms!

TOP TIP: In order to enjoy the best views of the old town walk out along the port’s: Quai Imperatrice Eugenie (harbour wall).

4) The Old Town (Things To Do In Menton France):

While it’s beautiful to admire the old town from the port, it’s even more fun to get lost in time by wandering through its medieval streets!

I discovered that there’s a picture-perfect view around every corner of the old town. Whether it’s a colourful house, ancient brick archway, or a hidden ally! However, my personal highlight has to be the Basilica St. Michel.

Very much the heart of the old town, this church can be seen from almost everywhere in Menton, and it dates back to 1819! Therefore, it’s no surprise that visiting St. Michel’s is one of the best things to do in Menton!

No list of what to see in Menton would be complete without mentioning the Chateau Cemetery. Built on the site of an old medieval castle, the haunting cemetery is strangely scenic. Its hilltop location provides beautiful views across Menton’s terracotta rooftops, and out across the distant mountains.

More than this, I found it fascinating to read the names and dates written across the ornate stone façades of the old graves and tombs, which often featured several generations of families. There are even a few gravesites of Russian royalty to be found…

6) Rue Saint Michel (What To Do In Menton France):

Next, we move out of the old town, and onto another of the best things to do in Menton France: Shopping along the wonderful Rue Saint Michel. Here you’ll find all things lemon as Menton is actually seen as Europe’s best and oldest lemon growing region.

Because of this, shops in the town sell anything from lemon vinegar to the oh so fabulous Lemoncello! Rue Saint Michel is also home to many quaint cafes and restaurants, which provides another opportunity to enjoy the fine Menton cuisine.

I discovered all these delightful things to do in Menton on a day trip from Nice, and I couldn’t recommend it enough! So here’s a brief guide on how to do the same:

Travel from Nice to Menton –

Travel from Nice to Menton couldn’t be easier… Trains depart from Nice-Ville station regularly. Tickets can cost as little as €4, and the journey only takes around 40 minutes.

The scenery along the way is also quite breathtaking and as you travel along the Côte d’Azur you’ll even pass through Monaco, which is another great nice day trip!

TOP TIP: the 100E Bus is another travel option which only costs €1.50 per person. However, the journey will take around an hour.

What to do in Menton in a day –

I was easily able to do all the above ‘Menton things to do’ in just one day, and I didn’t feel rushed at all. In fact, many people choose to visit the small village of Eze as well, which can be found just a few stops earlier on the Nice to Menton trainline.

I really enjoyed visiting the sleepy town of Menton, from its charming architecture to its gorgeous beaches, what’s not to love? For me, it is no doubt the best place to visit along the French Riviera!