Seville is the capital of southern Spains Andalusia region. It’s famous (amongst other things) for Flamenco dancing, its beautiful Gothic Cathedral, and having Europe’s oldest inhabited Royal Palace. Further, we can’t forget the beautiful weather which rarely drops below 15 Degrees Celsius even in the coldest months.

Because of this, I recently decided to spend 3 days in Seville over the summer. During which time I enjoyed the beautiful weather, visited all the top Seville attractions, and learnt more about the city’s rich history. This post is, therefore, my guide on what to do in Seville in 3 days based on my own Seville Itinerary.

Why you should spend 3 Days in Seville –

While it’s possible to do most of the top things to do in Seville in one day, I personally believe cramming a visit into such a small amount of time won’t allow you to fully appreciate the city. I found that some attractions (such as the Cathedral and Real Alcazar) take 3-4 hours each to tour if you want to see all they have to offer. Therefore there’s simply not enough time in one day to do them justice! 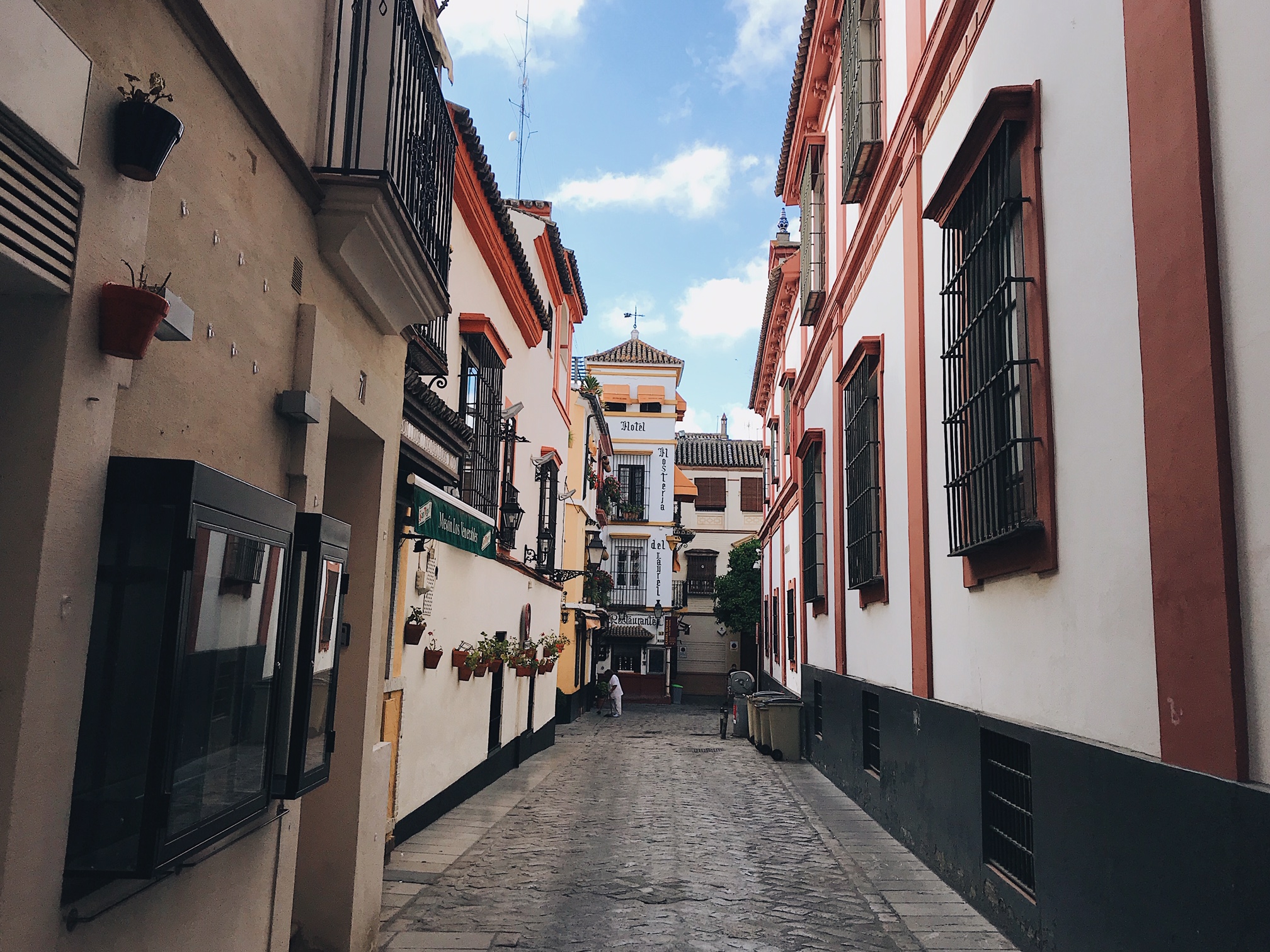 But more than this, if you visit in the summer months (while the sunshine is glorious) the mid-day heat is very intense as it’s not uncommon for it to reach 40°C. This can make touring the places to visit in Seville a little miserable and very sweaty.

However, spending more time in Seville allowed me to do all my exploring in the morning and late evening when the temperatures are much more manageable! Equally, this also meant I was able to spend some of the day relaxing by the pool, which was a fantastic way to cool off and make the most of the Sunshine! 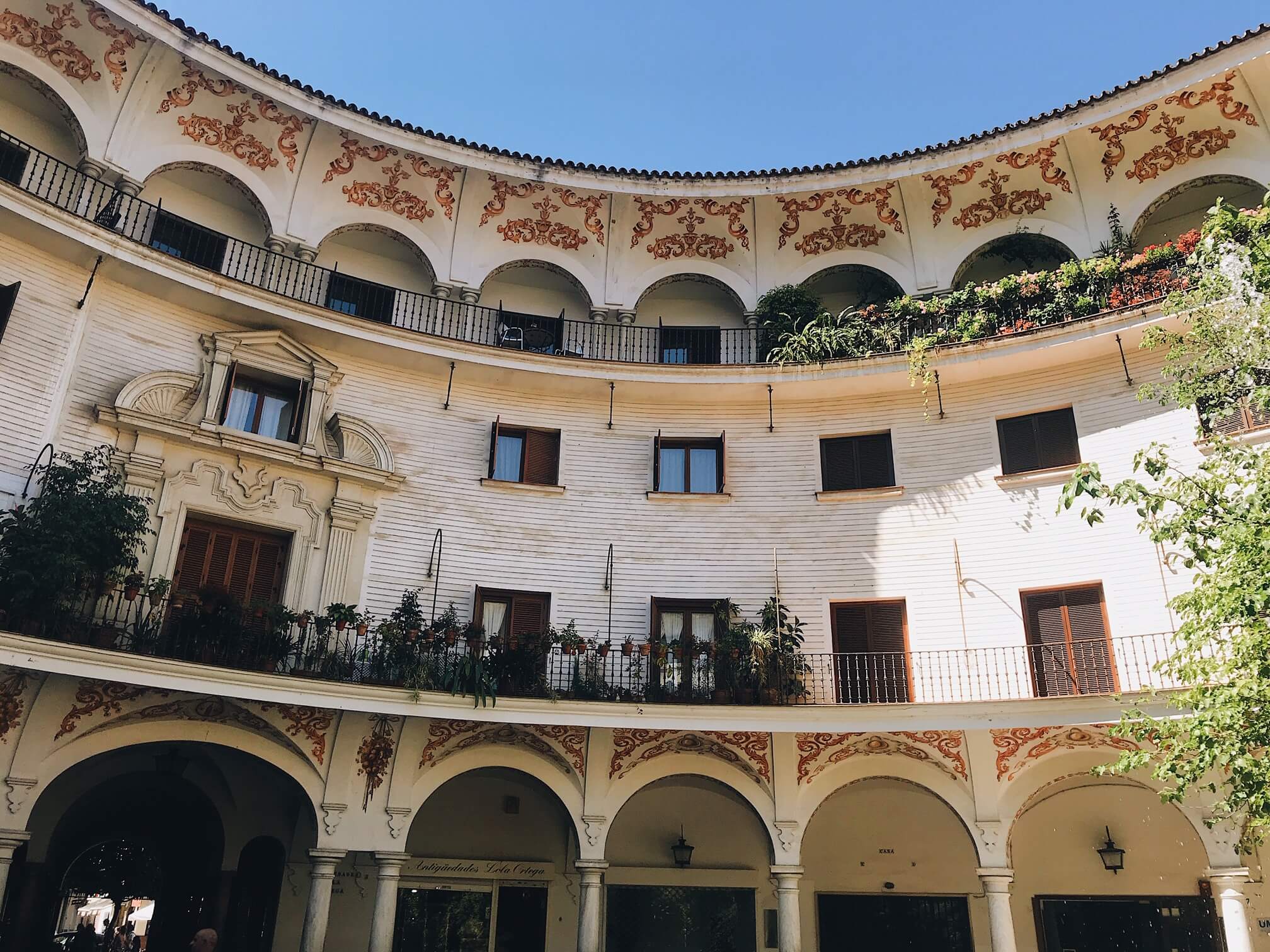 To this end, I obviously toured Seville at a relaxed pace. But, the city is only small and after three days I was more than happy that I’d visited all its highlights, whilst also having enough time to take in its finer details. Thus 3 days in Seville is the perfect amount of time, any more and I feel I would have been left twiddling my thumbs somewhat…

Where to Stay in Seville –

The best place to stay in Seville is the charming area of Santa Cruz, as its the oldest quarter of the city and therefore home to most of the things to do in Seville. While there are many hotels in this region I discovered that the best accommodation option for price and convenience was Airbnb. I stayed in the stunning Bryon Suites which is just a few minutes walk away from the cathedral – you simply couldn’t ask for a better location!

On top of this, my apartment was immaculate, well equipped and beautifully decorated, Oh and I can’t forget the stunning rooftop pool, which as I mentioned above, I took full advantage of! 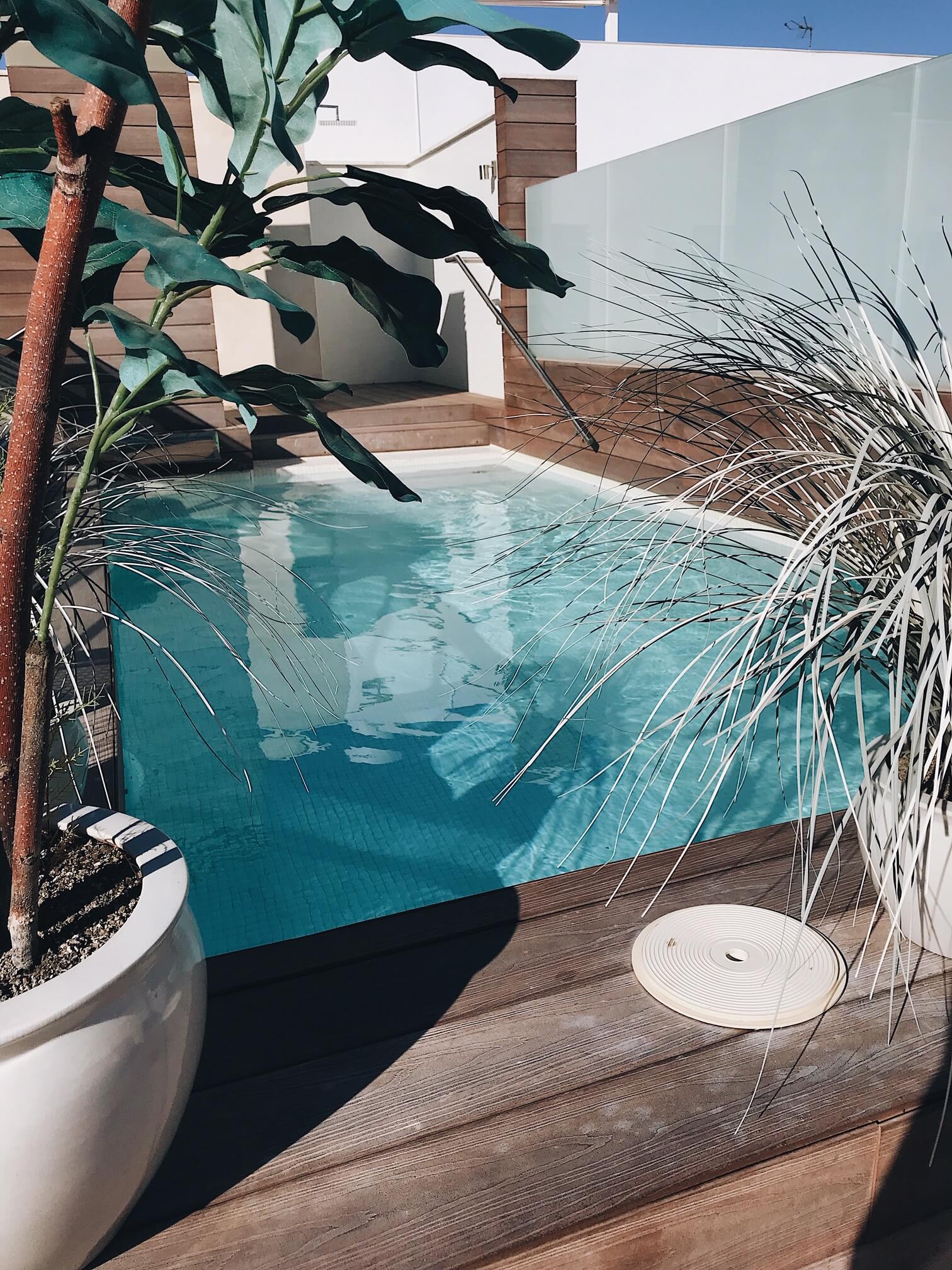 Looking to explore more of Spain? Why not check out how you can spend 2 days in Barcelona…

Three Days in Seville Day (One) –

So now you know where to stay, and that 3 days in Seville is the perfect amount of time, let’s get into my actual Seville Itinerary so that you can also find out the best things to do…

I started my 3 days in Seville by waking up early to explore the previously mentioned Jewish Quarter (Santa Cruz). The areas endearing character centres around in its narrow, pedestrian-only streets, which provide shade amongst the picture-perfect centuries-old houses, palaces and churches.

Getting lost meandering through these twisting streets was without a doubt one of my favourite things to do in Seville, and it was definitely a great idea to explore in the morning, as other tourists were nowhere to be seen. I, therefore, had the streets all to myself, aside from the odd local setting up their shop/restaurant for the day.

My journey through Santa Cruz ended at arguably the neighbourhoods most impressive site: The Real Alcazar. Not only is this the oldest royal palace still inhabited in Europe, but the Real Alcazar is also made up of a unique collaboration of architectural styles, including Moorish, Gothic and Italian Renaissance. It also has an elaborate garden.  Therefore, visiting the palace provides a true ‘walk through history’. 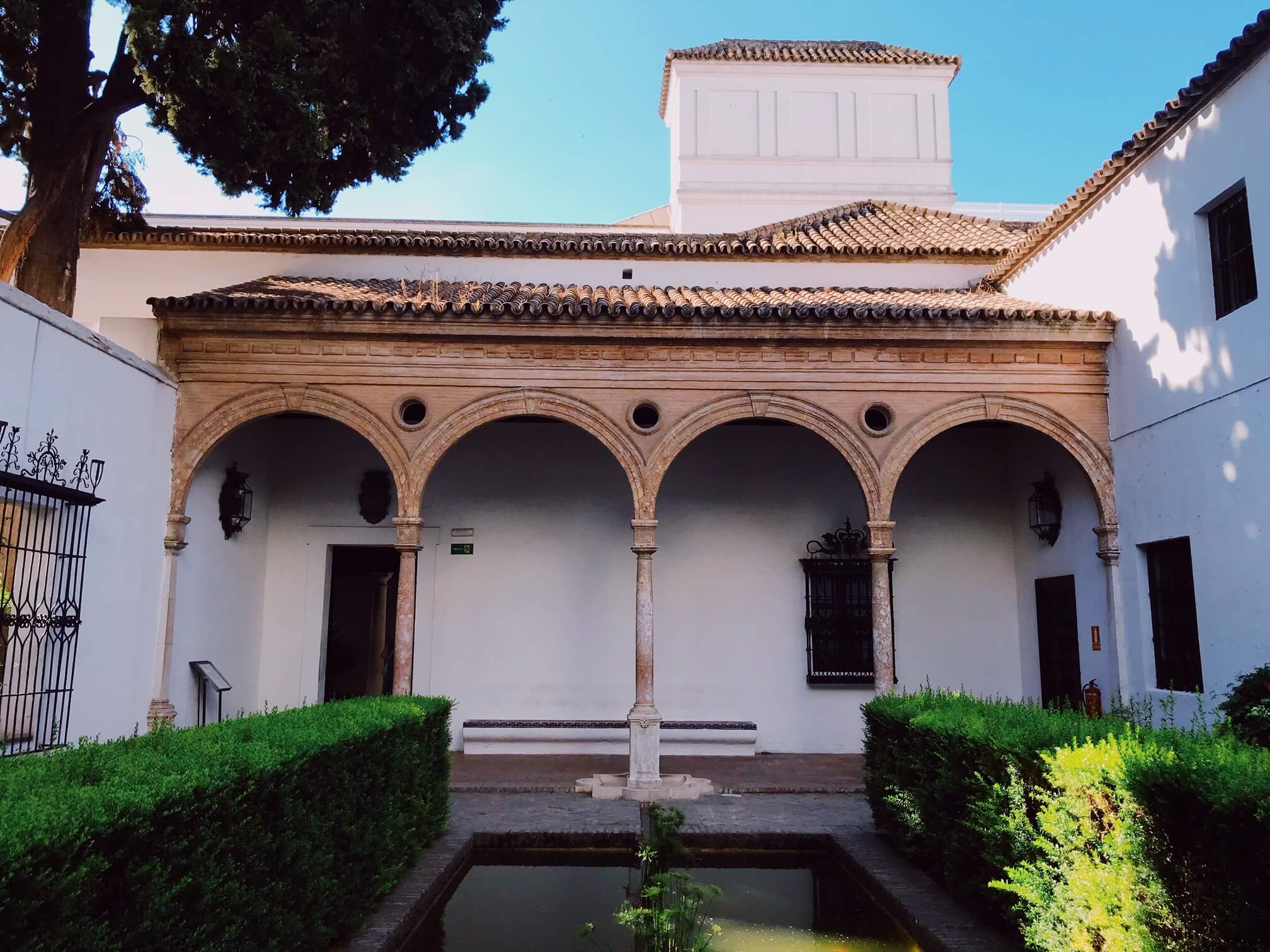 For me, the most impressive part of the Real Alcazar was the Hall of Ambassadors and its stunning courtyard, which dates back to the 12th century, making it the oldest section of the palace. Built by the Almohades (Berber Muslims), it is truly breath-taking with exotic Moorish architecture, intricate ceramic tiles and ornate floors.

More than this, while the palace as a whole has a rich and vibrant history it has become most well known in recent years for doubling as the ‘Water Gardens’ in Game of Thrones.

As a huge fan of the show, I instantly recognised parts of the Real Alcazar as the ‘Kingdom of Dorne’ which made wandering around all the more exciting. The key sites to look out for that were used for filming include the Hall of Ambassadors, the Mercury Pool, the Baths, and of course the gardens (which are a must-visit)!

Beautiful Gardens of the real Alcazar which are a must-visit

Beautiful Gardens of the real Alcazar which are a must-visit
TOP TIP: As one of the top Seville Attractions the Real Alcazar can get very busy. Therefore I’d highly recommend pre-booking a time allocated ticket online in advance. By doing so I was able to walk straight into the palace, bypassing the very long and hot queue!

After a busy morning, I spent the next few hours of my first day in Seville relaxing, before venturing back out to Santa Cruz to watch the sunset from the old quarters most unique landmark: The Metropol Parasol. 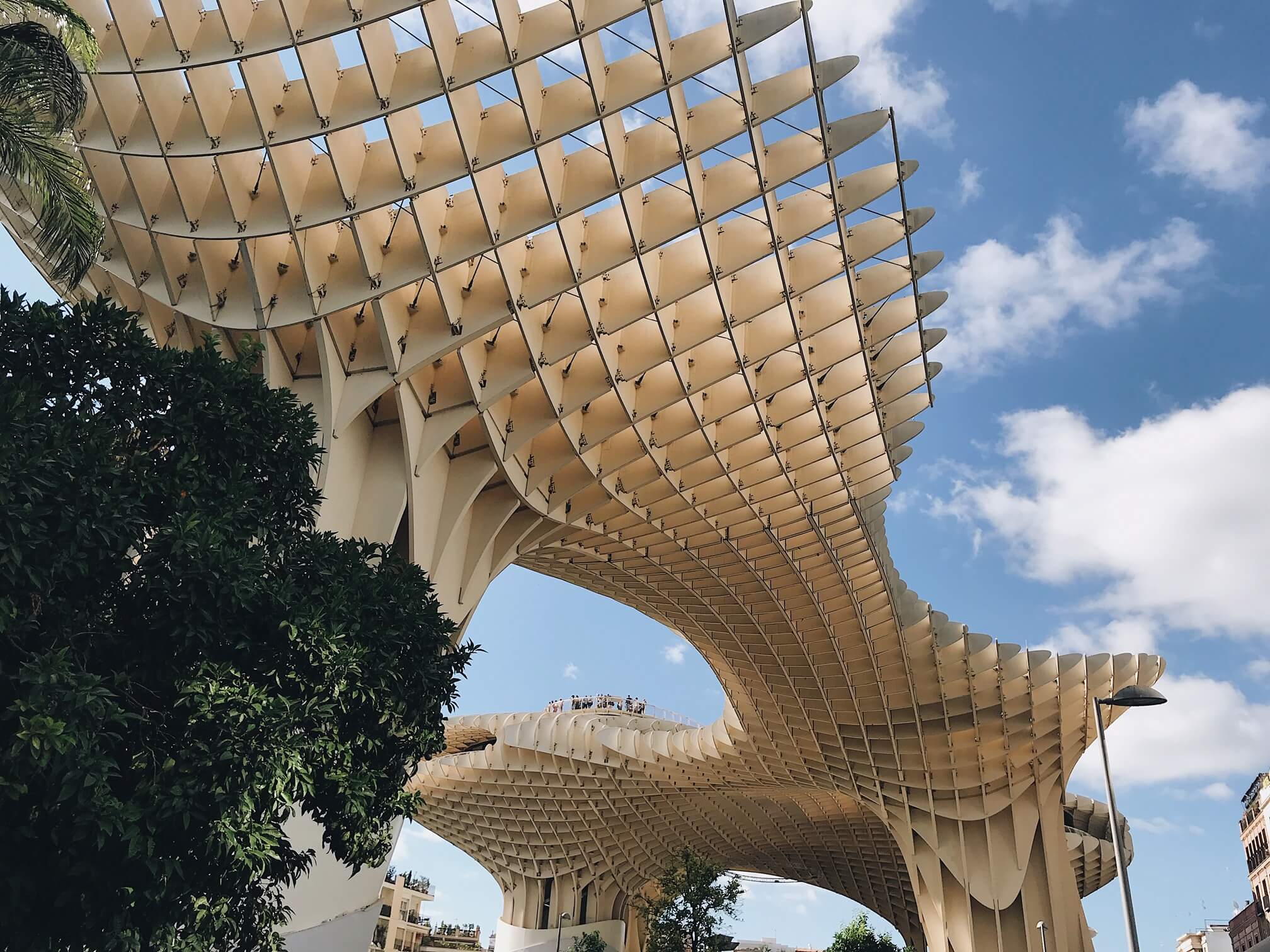 Known locally as ‘Las Setas’ (The Mushrooms) it opened in 2011 and is the worlds largest wooden structure. Although it’s divided the opinions of many, I found the structure to be quite impressive and oddly beautiful. But more than this, The honeycombed roof features hidden walkways that wind along the top of the structure.

These walkways proved to be the perfect place to watch the sunset as they provide breath-taking views over Seville! 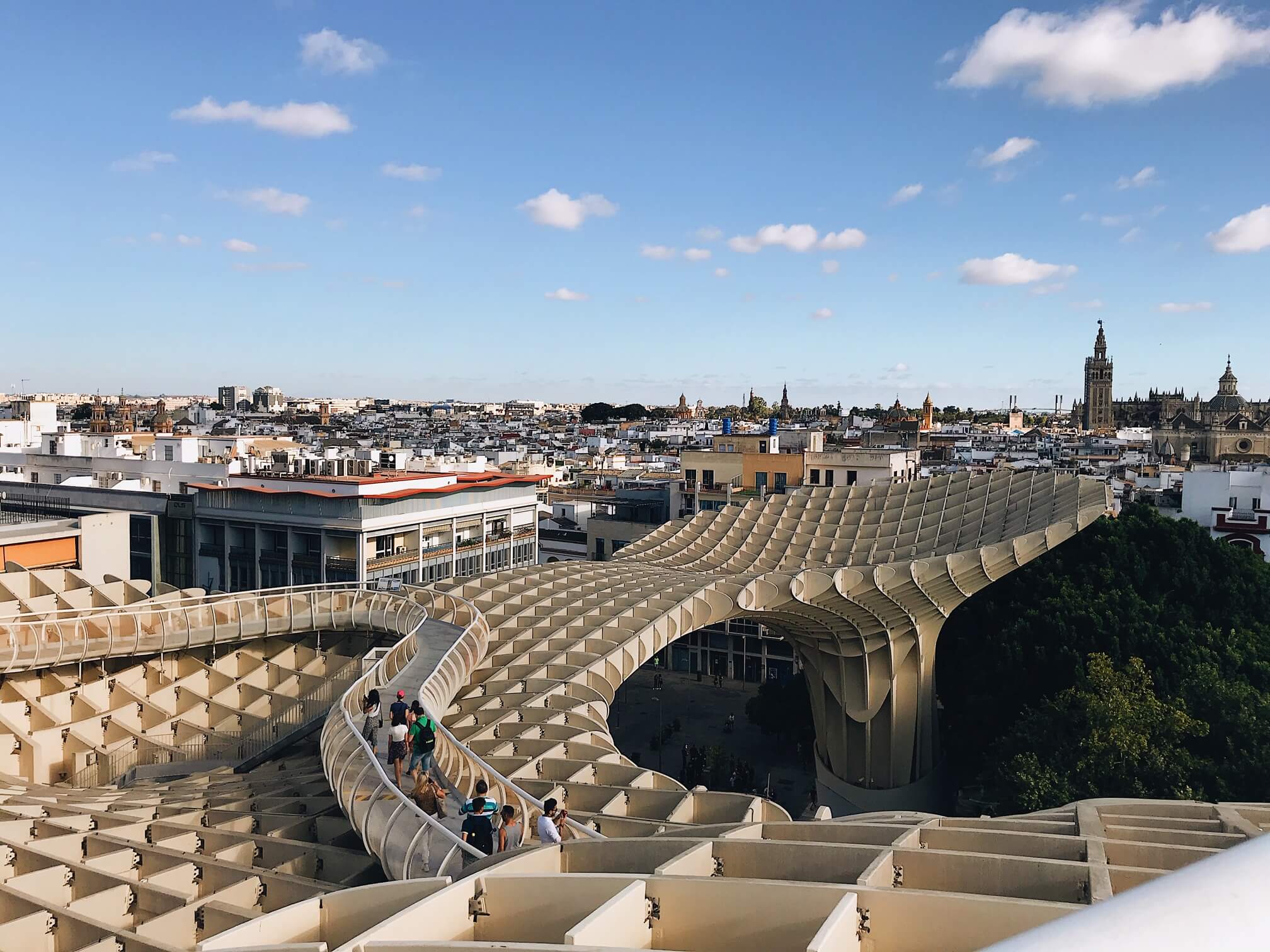 TOP TIP: You have to pay 4 Euros to walk across the roof of the Metropol Parasol, but it’s more than worth the money! Tickets are brought in the basement, where you’ll also find the lift that will take you to the top.

I was up early again on my second day to visit another of the best things to see in Seville, the city’s magnificent Cathedral. Home to the tomb of Christopher Columbus, the Cathedral was built between 1434 and 1517, and it’s the largest Gothic Cathedral in the world! 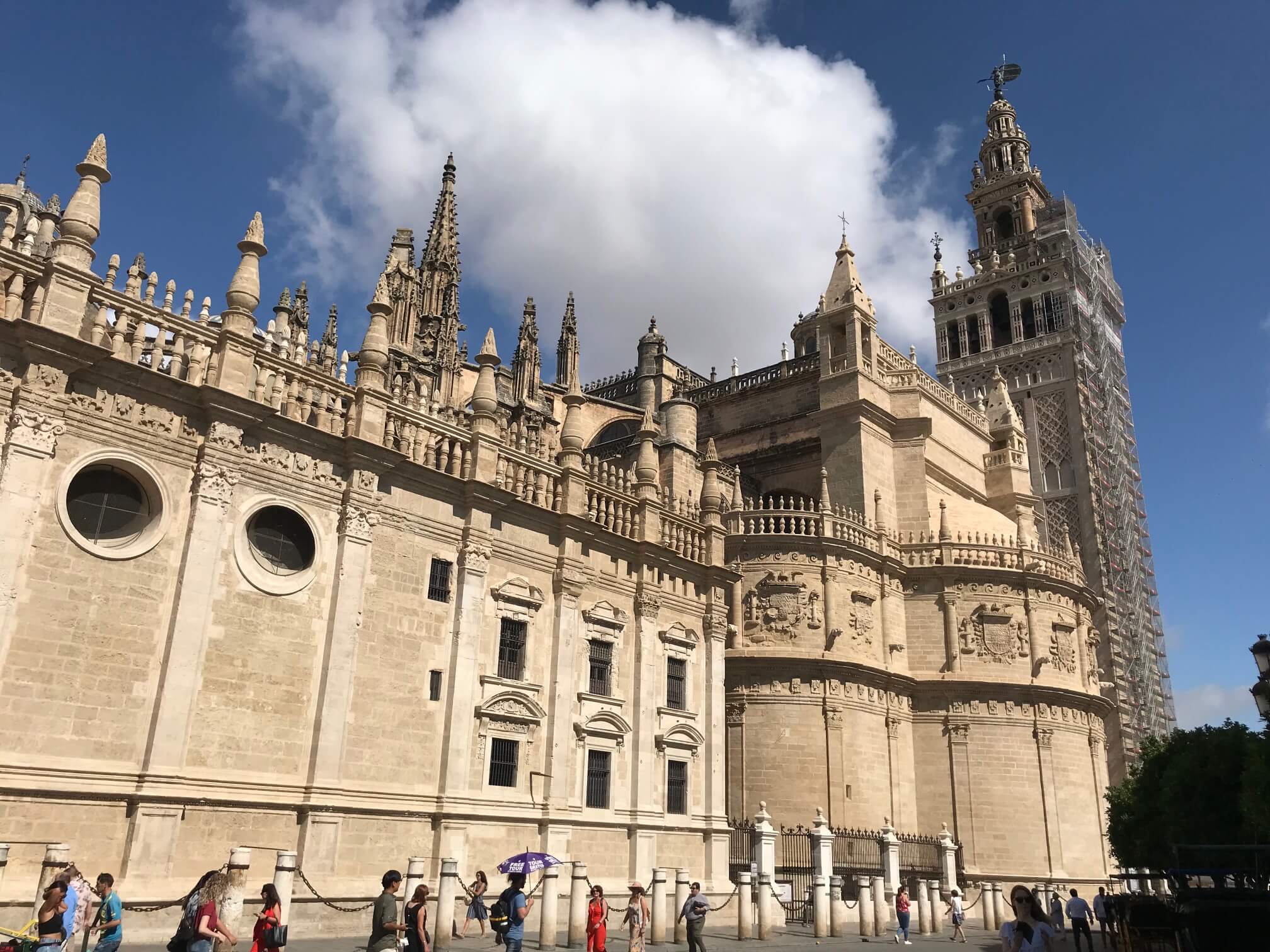 While the scale and majesty of the Cathedrals main Nave is definitely a sight to behold, I found the Cathedral to be particularly interesting and unique thanks to stunning additions like the Royal Chapel (where many of the Cathedrals treasures are currently on display) and the Chapter room which features a distinctive oval ceiling.

In addition, the Cathedral was actually built on the remains of an ancient Mosque. Several features of this original Mosque are still present, most notably the Giralda Bell Tower which dates back to the Moorish period in the 10th century.

Standing at 104.1m, the tower is imposing but also elegant thanks to the fine details of its Moorish design. Further, having stood for so long it’s really no surprise that the Giralda is an important symbol of the city. 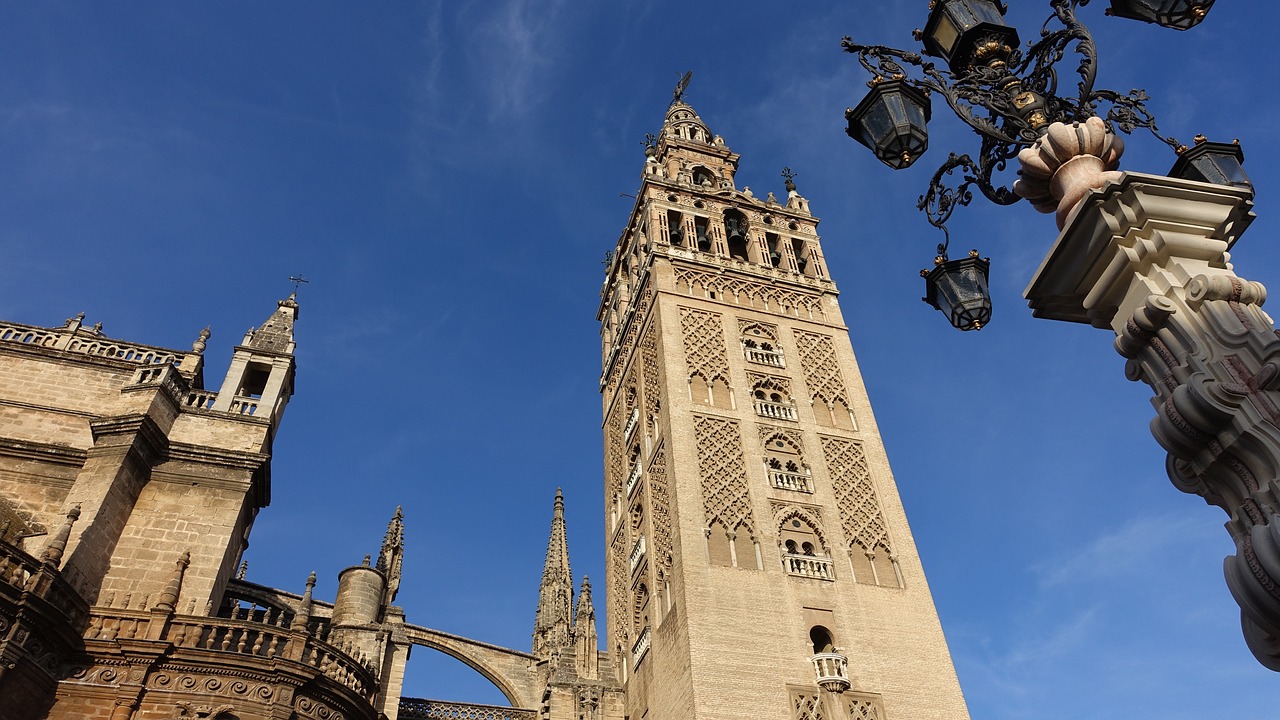 As part of touring the Cathedral, you can walk up the winding ramp of the bell tower to visit a stunning viewing platform at the top! From here I enjoyed amazing views of Seville.

TOP TIP: Along with the Real Alcazar, the Cathedral is probably the top thing to see when you visit Seville, therefore the queue to get in (especially in summer) can be insane! On my visit, the queue snaked all the way around the edge of the Cathedral… But Luckily I had Pre-Booked a time slot online and was able to walk straight in, saving myself a good two hours!

So my advice is to book in advance, tickets on the official Cathedral website are only 9 Euros (or 4 for reduced tickets). But I’d also suggest purchasing the audio guide as there’s so much to see and learn about!

After taking refuge from the mid-day sun at my Airbnb, I decided to visit what turned out to be my favourite Seville attraction: Plaza de Espana.

Built in 1929, The Plaza consists of a large semi-circular Renaissance/Moorish style building, which gives the whole space an undisputable fairytale feel. This is only enhanced by the 500-metre long canal that follows the curve of its facade! 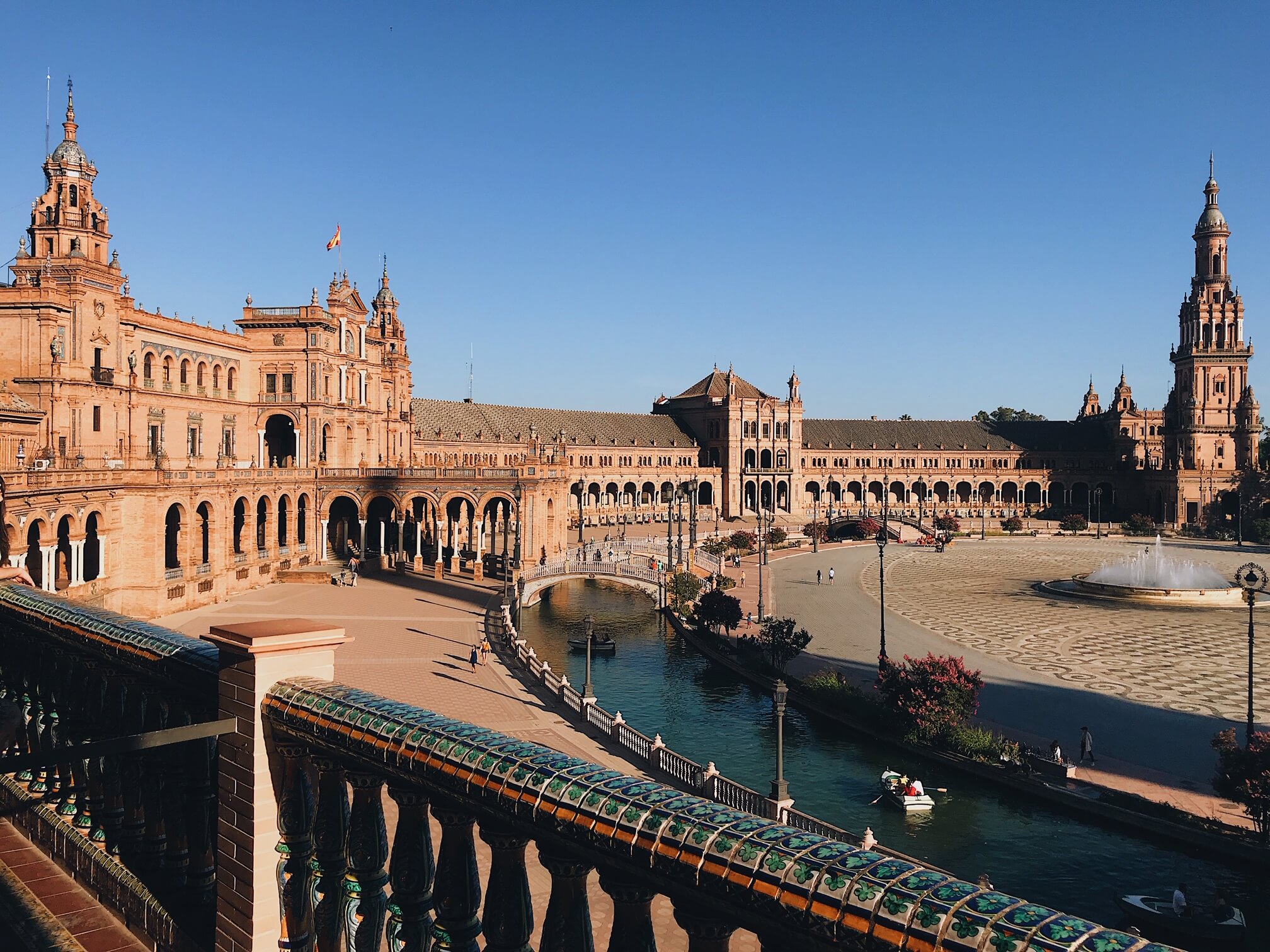 Measuring 50,000m2 in total, the scale of the Plaza de Espana is insane! Therefore, I made sure to climb one of the building’s towers (which you can do for free) so that I could take in the whole square from above! Overall, I thought that the square had a peaceful, relaxed and magical vibe.

I ended the 2nd of my three days in Seville by visiting the Maria Luisa Park, which is located next to the Plaza de Espana. Donated to the public in 1893 by Maria Luisa Fernanda de Borbón, the vast grounds of this shady refuse make up the oldest public space in Seville. 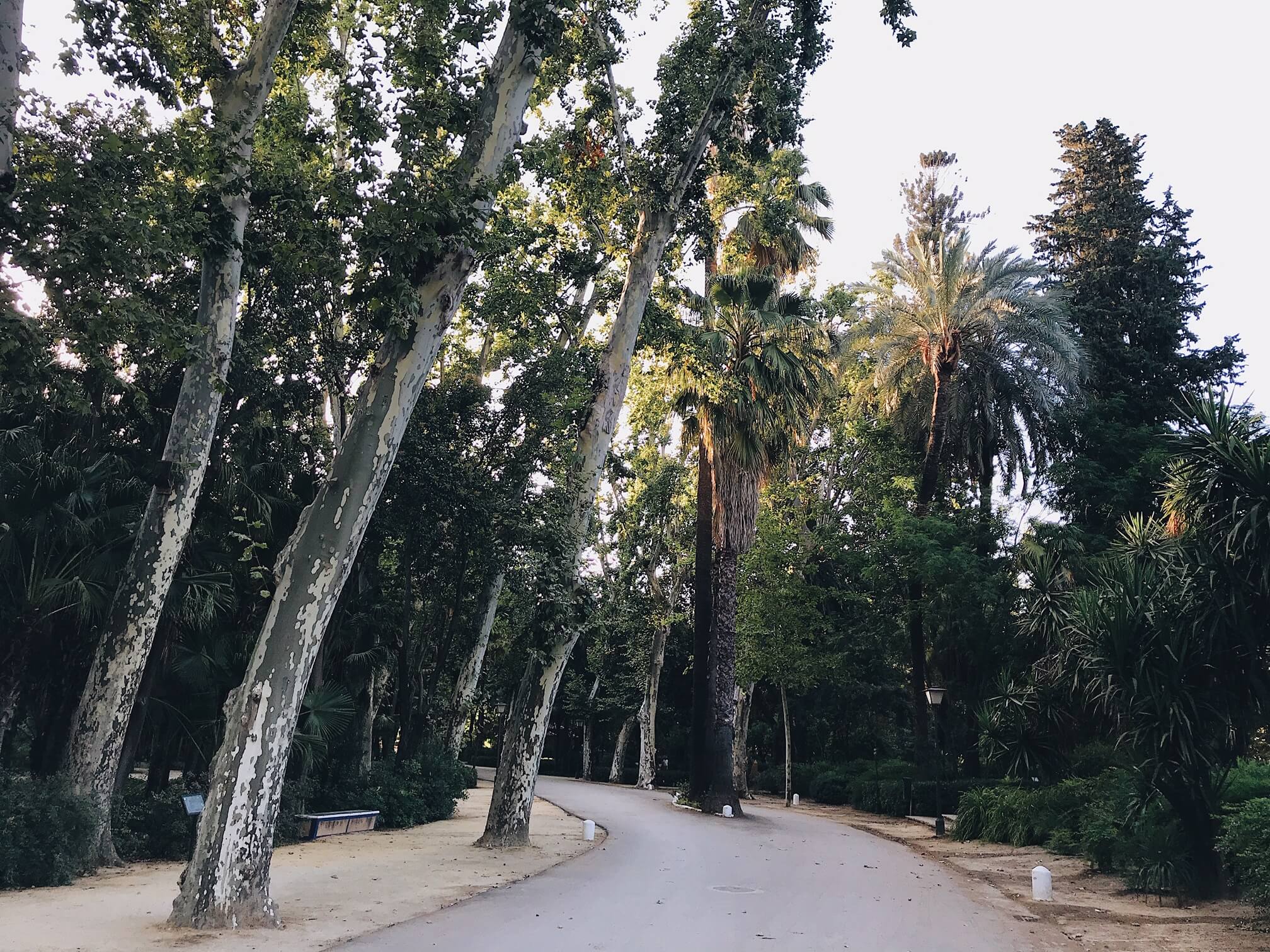 Full of mature trees, tiled benches, ponds, fountains and pavilions, the park is a wonderful place to take an evening stroll. Wandering through the park was, therefore, the perfect way to end my second day.

I spent a large proportion of my third day in Seville taking in the cities finer details. For example, I walked through picture-perfect streets and stumbled upon delightful squares and hidden gems such as the old city walls. 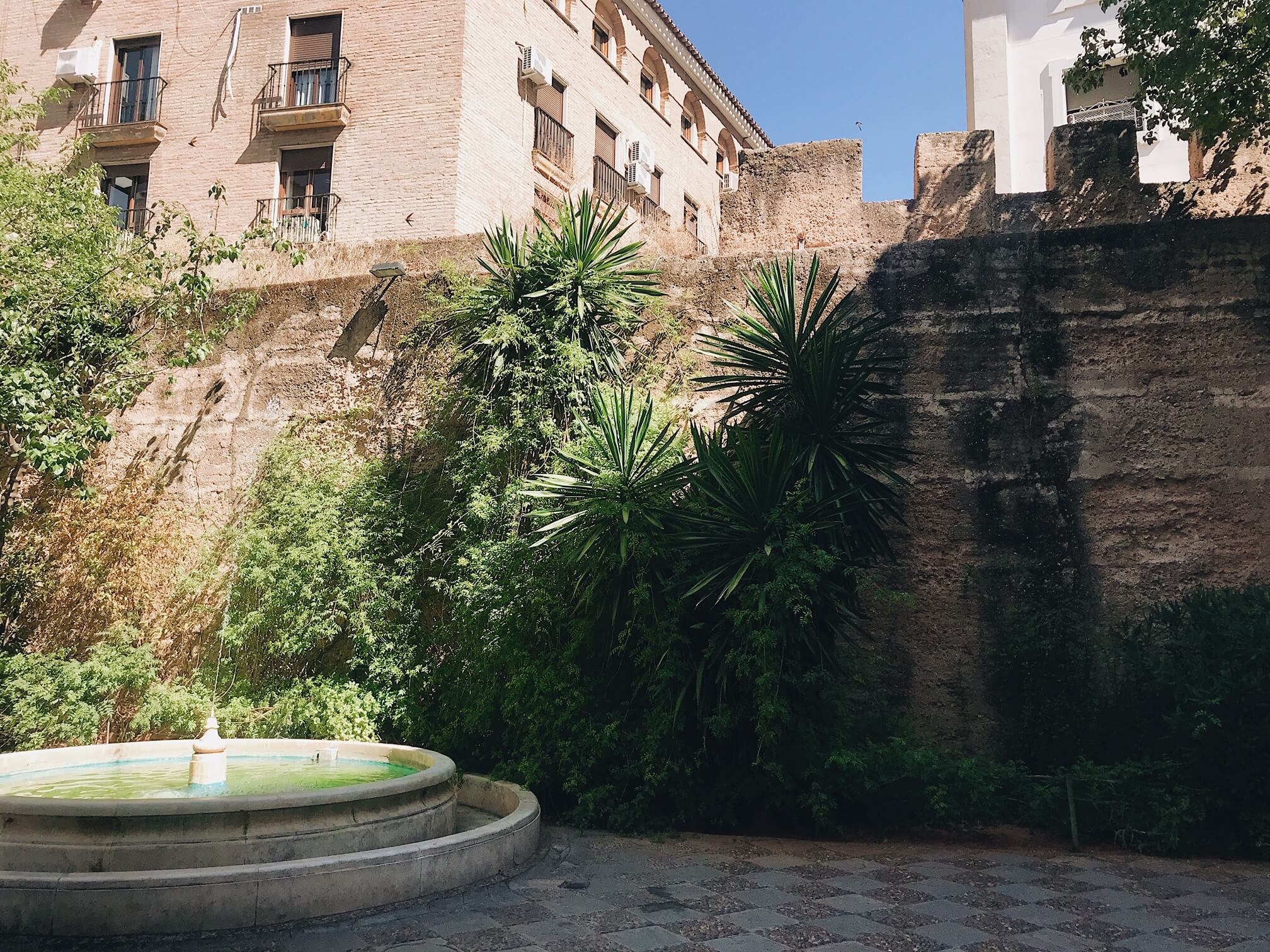 However, there was also a few more things to do in Seville Spain that I’d not yet ticked off my list…

Sevilles ‘Tower of Gold’ or Torre del Orro is the focal point of a large promenade that runs along the bank of the Guadalquivir river. The tower is a must-see as it is another of the city’s landmarks which dates back to the Moorish period. Further, its one legacy of the Almohades which has stood unchanged since 1220. 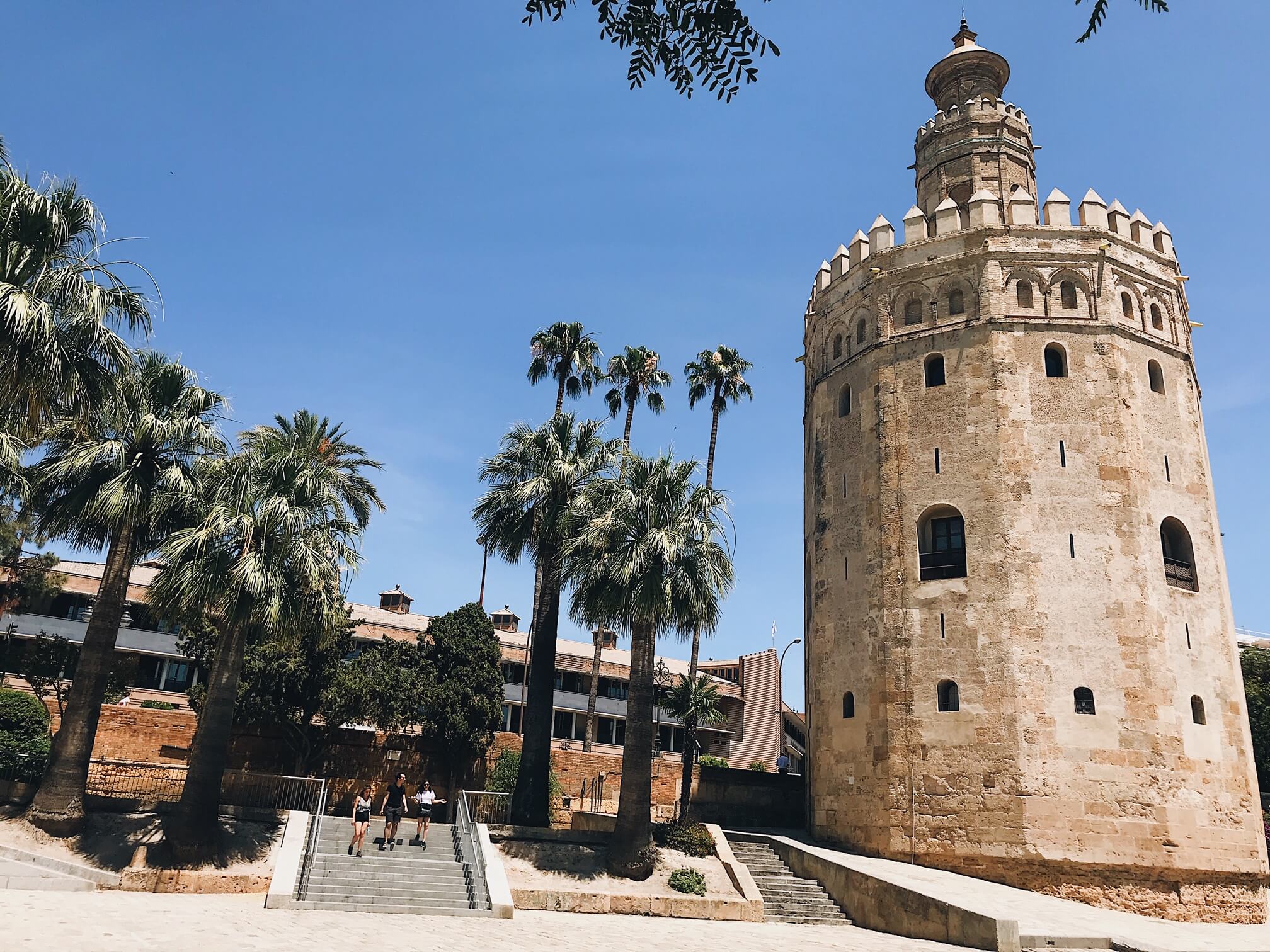 Top Top: while there’s still plenty of things to do in Seville, you could also consider taking a day trip for the last day in the city! Highlights include the beautiful Granada and Ronda…

While you can pay to climb to the top of the watchtower, I personally enjoyed simply walking along the riverbank, wondering what the city must have been like when the tower was first built…

One part of Seville that many tourists fail to leave time to visit is the Triana neighbourhood, which is located across the Guadalquivir river. Since the city’s largest bridge is located next to the Torre del Orro, it seemed only right that I crossed the ‘Puente de Isabel II’ and spend my last few hours in Seville exploring this often forgotten neighbourhood. 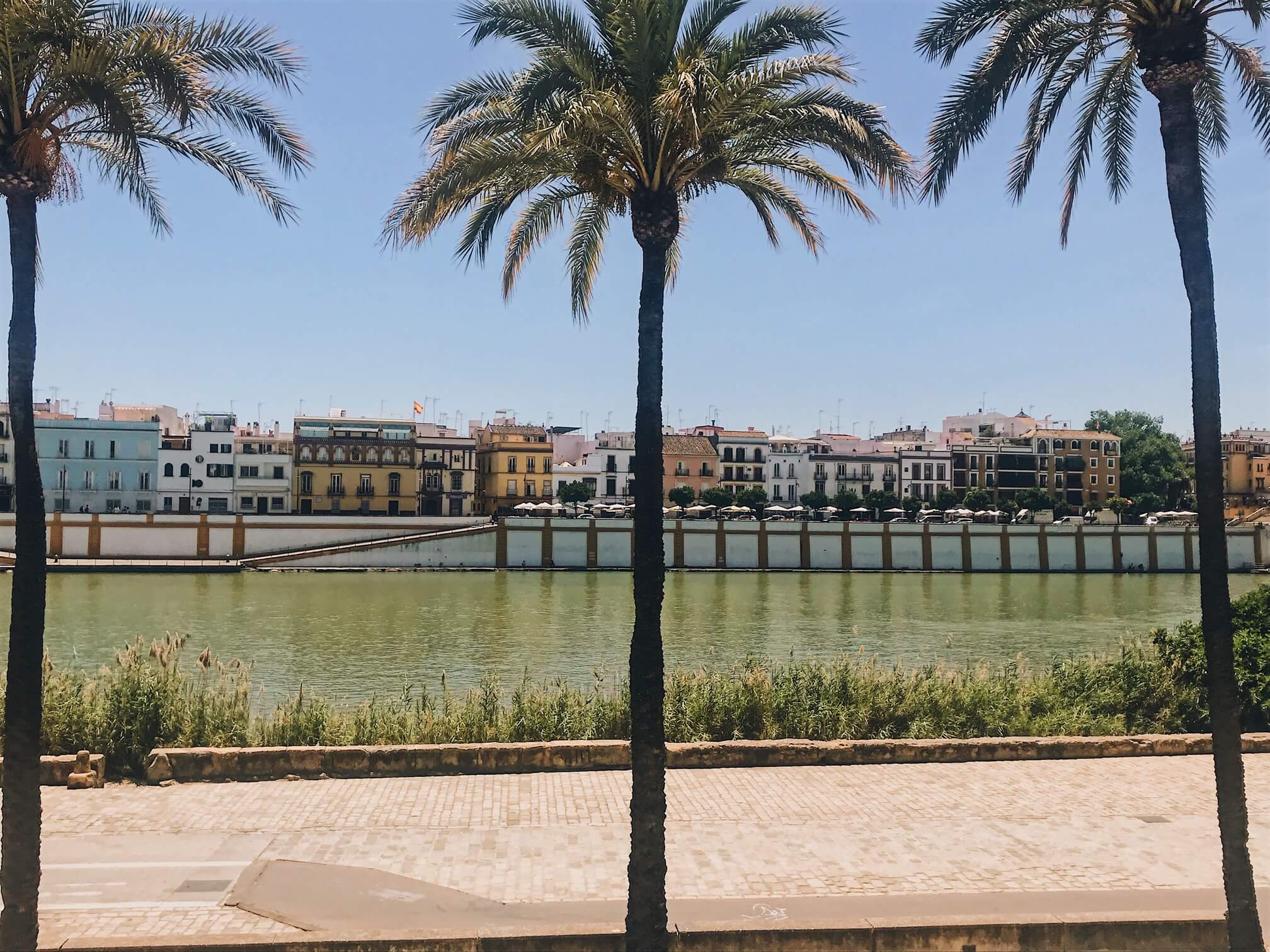 I found Trinana to be Colourful and Soulful! To me, it felt like a completely different city, which is what makes it so worth visiting!

That concludes my guide to everything I did during my 3 days in Seville. I hope you can see from this that three days is (as I mentioned at the start of this post)  the perfect amount of time to spend in the city. My Seville itinerary allowed me to fall in love with the city’s charm, character and culture! Which, thanks to its position right on the tip of southern Spain, is diverse and unique…