With their rustic charm, golden sand beaches and glistening turquoise waters, the Gili Islands in Indonesia come close to paradise. During my 2 days in Gili Trawangan the archipelago certainly captured a piece of my heart! However, the islands also have a dark secret: the suffering of the Cidomo Horses which are synonymous with life on the Gili’s…

All standing under 14.2 hands (technically making them ponies) the Cidomo Horses are mainly all imported from Lombok. Once wild, their ancestors were captured and tamed by local Sasak people (who you can read more about in my Lombok day trip itinerary).

Today, part of the Gili’s charm is the fact that no motor vehicles are allowed on the Islands. However, this means that all the burden of transporting people and goods has fallen onto the horses… They’ve been trained to pull large vibrant carts, known locally as Cidomo’s: hence the general name given to them!

My Experience on Gili Trawangan –

When I arrived at Gili Trawangan’s port, the first thing I saw was rows of the small horses attached to Cidomo’s. As a horse lover/owner I immediately went over to say hello. It was at this point that an owner offered me an overpriced ride to my hotel…

Not understanding how close my hotel was to the port, I accepted and climbed aboard. It was a decision I immediately regretted as the driver whipped the horse into a fast paced trot, despite the stifling mid day heat. I felt like telling him to let the poor horse walk, but chickened out, something I’ve felt guilty about ever since!

HINT: if you visit Gili T don’t be as naive as me! The island is pretty small, most hotels and guesthouses are less than 1km from the port – WALK! 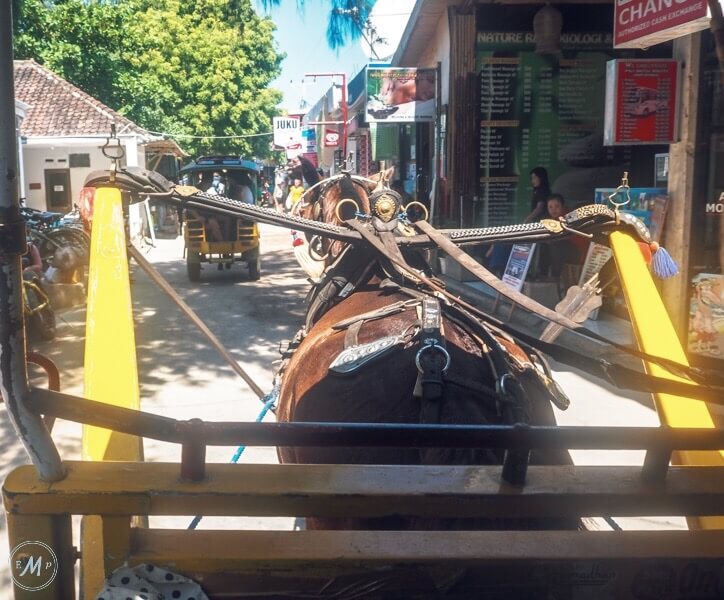 This was only the first time I felt as though the Cidomo Horses were suffering! During the remainder of my time on the Gili Islands, I witnessed several of the horses buckling under the weight of literally bulging carts. Further, many were underweight and emaciated. They appeared to have little social interaction with other horses, and were constantly uncomfortable due to ill fitting harnesses.

However, what was worse were the hours I noticed some of the horses working… I recognised one horse I’d seen in the morning still working at 11pm (probably without a break).

The suffering of these beautiful horses was quite clear to see! By the end of my stay, it made me angry to see tourists loading their heavy cases onto the back of the carts, couldn’t they tell the horses were exhausted – perhaps it’s harder for non horse owners to recognise? This said, I couldn’t help but feel a hypocrite, after all I myself took a Cidomo ride when I arrived on the island.

Because of this, I feel it’s important to help educate visitors before they arrive at the Gili’s, so other animal lovers don’t make the same mistakes as I initially did! Especially since most articles I’ve read seem to praise the Cidomos, stating that they add to the Gilis ‘tranquil vibes’. 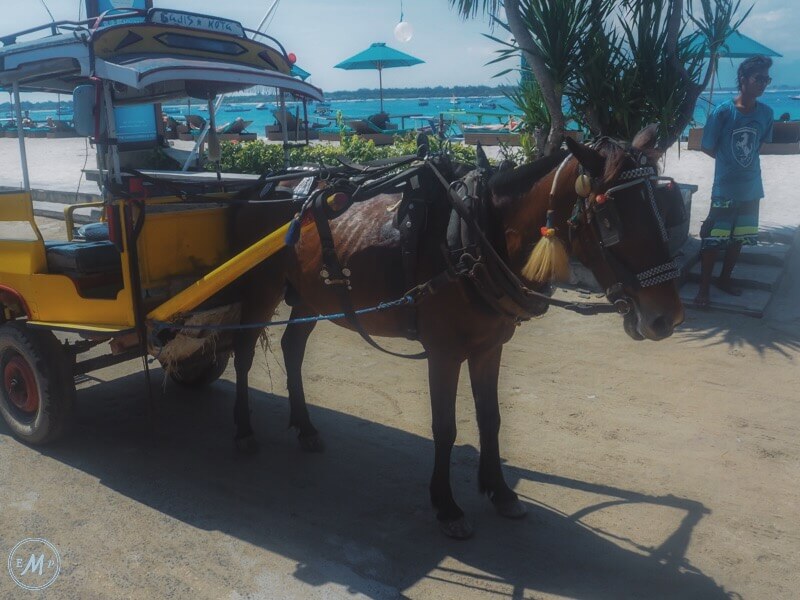 In addition, I wanted to make sure that this post was backed up by accurate information. So following my trip, I did some research on the true extent of the suffering of the Gili horses, and below you’ll see what I found.

The extent of the Cidomo Horse’s suffering  –

What I witnessed on the island is only the tip of the iceberg. According to several charities websites, the Cidomo Horses receive no veterinary care, are given only salt water to drink and insufficient food. On top of this, many have no shelter. Those that do are tied so tightly that they can’t even lie down.

If this isn’t bad enough, some activists state that the owners ensure tourists mainly see the healthier animals. This means the horses in the worse condition are kept out of tourists eyes and instead work pulling massively overloaded carts full of building material and supplies to the islands hotels and guesthouses. 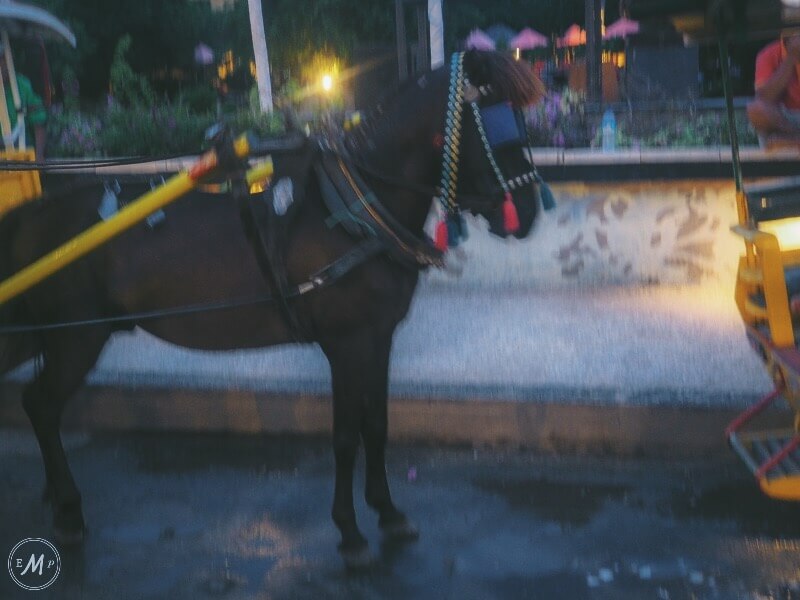 Whipped and beaten, to keep them moving, the Cidomo Horses on the Gili islands are literally worked till death. It’s estimated that they live a mere 1-3 years – in comparison you’d expect a healthy horse to live to at least 20.

Although this is terrible, I want to clarify that by no means every horse on the island is suffering. Of course they’ll be owners who care for their horses with the utmost love. I for one witnessed a man (who obviously cared for his horse) washing his pony down in the ocean after a days work.

Whats Being Done about the Cidomo Horses Suffering –

I struggle to believe that the owners of the Cidomo Horses are cruel. Every single person I met on the islands, was kind and honest.  In many cases, it’s simply a matter of lack of education. It may seem absurd to us that owners don’t understand that their animals need fresh (not salt) water, but this is often the case!

Thankfully over recent years, several organisations, such as the Gili Carriage Horse Support Network  have been working tirelessly to educate horse owners on the islands, offering free clinics twice a month, and stressing the importance of fresh water. 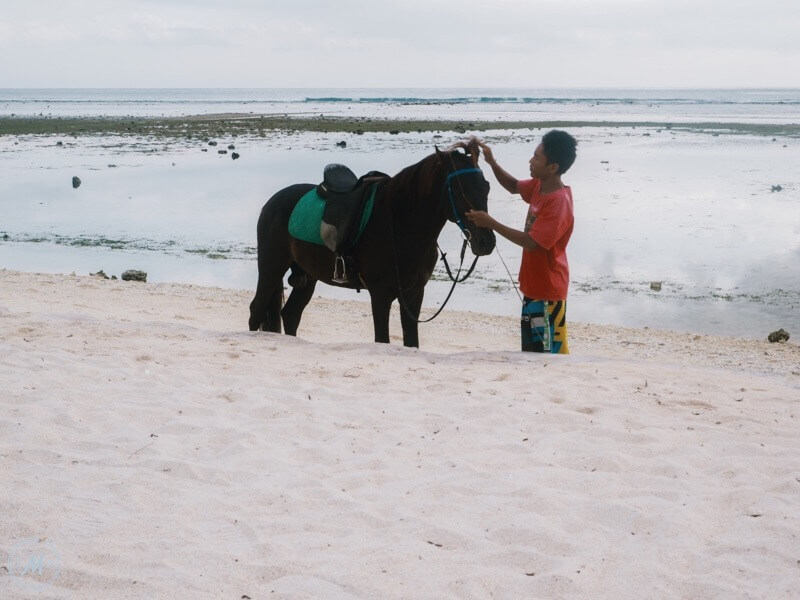 Further measures have been brought in to improve the situation such as weight restrictions (although they are not yet properly enforced) and ensuring horses harness’s are fitted correctly.

However, the situation is still no-where near good. Some even say its getting worse as more and more tourists flock to the island, meaning even more work for the horses. For me, the best answer would be to get rid of the Cidomos. Although its not likely cars would be introduced, increasing the number of  bicycles and  introducing pedicarts (like the ones you see in India) could help ease the strain.

This said, I’m not an expert and the above idea is unlikely to be plausible in the real world. The situation is heartbreaking and complicated, but not unlike that of 1000’s of working horses, mules and donkeys around the globe. 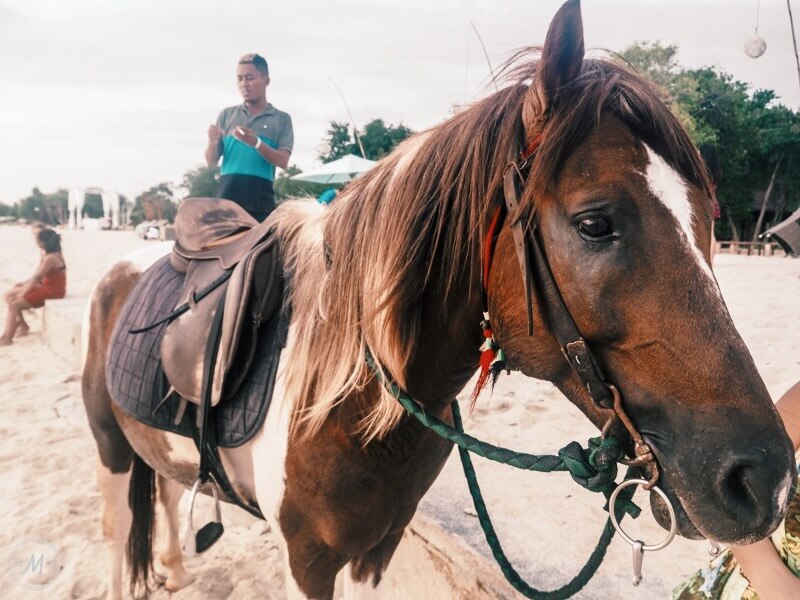 For now, the best we can do as visitors to the Gili Islands is to help decrease the demand for Cidomos by walking or cycling until the situation improves. Other than this, it’s best to leave it to the experts! Here are the links to the main organisations working together to make a difference:

DISCLAIMER:  There are some activists that propose a boycott of the Gili Islands. However this was not my purpose for writing this post. As I said at the beginning, I overall think the Gilis are a fantastic place. My time on the island brought many happy memories! I simply wanted to share the plight of the horses, so travellers will think twice before stepping into a Cidomo.

For me, it’s my mission to explore ‘Earth’s Magical Places’, and while I always try and be positive on this blog, I believe it’s important to tell the full story, not just the nice parts about golden beaches and tropical getaways!

As always, thanks for reading! If you were affected by this post, support and donate to the linked charities to help 🙂

Spread the word and PIN FOR LATER: 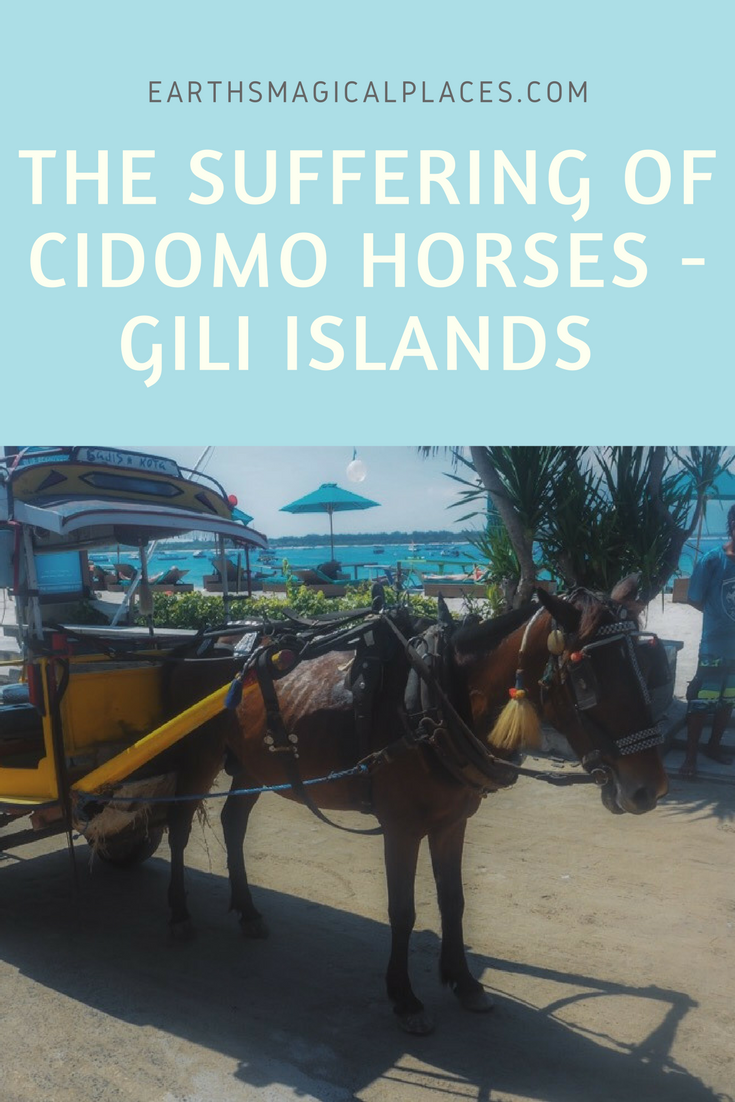