With cheap and regular flights from the UK, and weather that almost always promises blue skies, my search for a winter sun getaway in October took me to Nice France!

Founded by the Greeks, and located on the glistening Mediterranean coast, the city is no doubt a jewel of the French Riviera. However, while Nice is nice (sorry it had to be done) I wanted to see as much of the Riveria as possible on my trip, so I ended up just spending one day in Nice…

Is One Day In Nice France Enough?

Nice is one of the largest cities in France, so you could easily spend a week enjoying the city and relaxing on a stretch of its 7km long beach. However, exploring Nice in a day is more than doable! 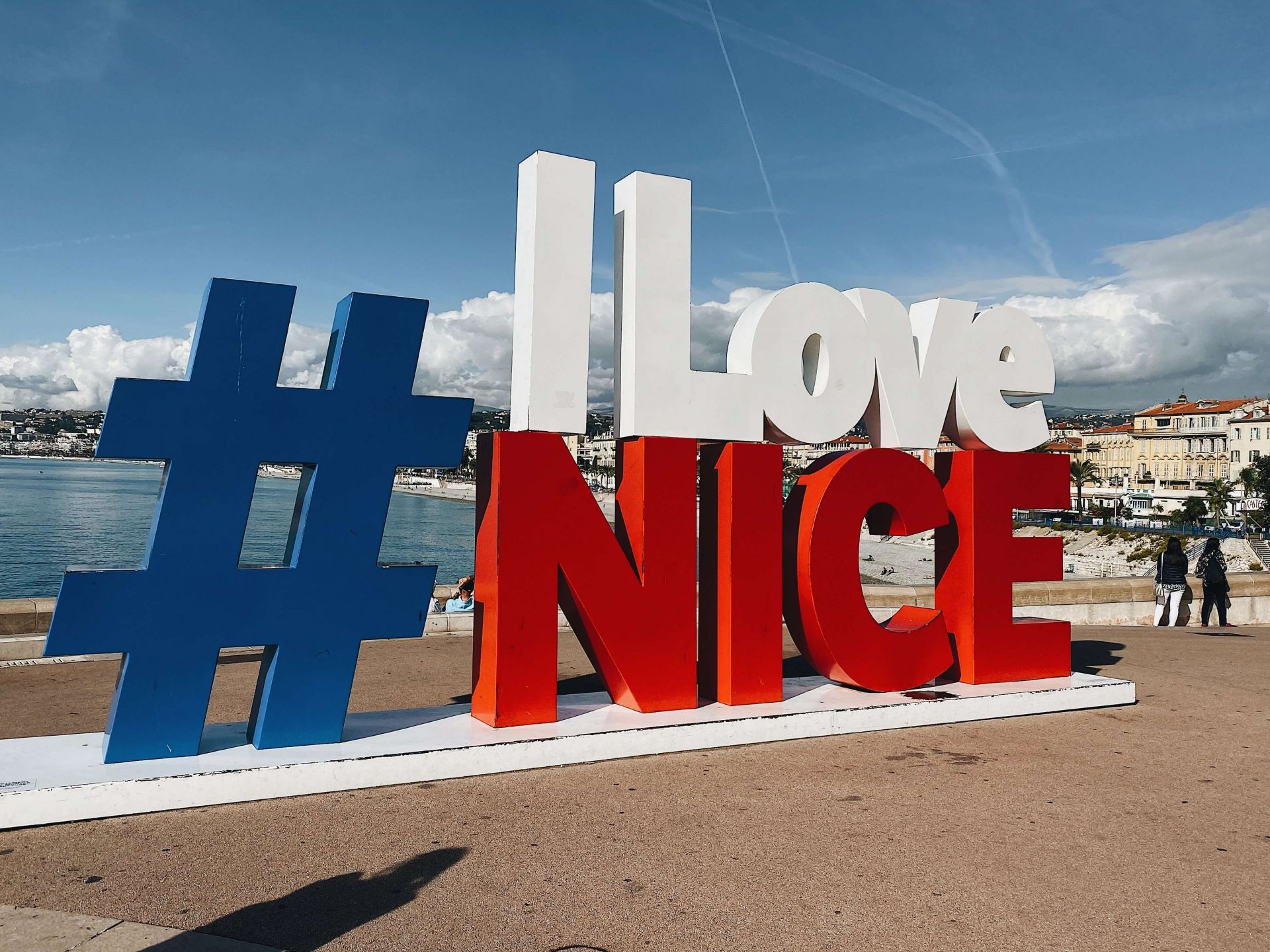 For example, I was easily able to see the city’s highlights and indulge in its old-style glamour in just a day. More than this, afterward, I felt more than ready to move on to explore more of the French Riviera. So overall I’d definitely say that 1 day in Nice is enough time!

What to see in Nice in a day –

As far back as the 18th century, English aristocrats have ventured to Nice to escape the dreary winter weather back home. I followed in their footsteps by visiting in October and therefore saw it fitting to start my one day in Nice France itinerary by walking along the Promenade Des Anglais, which gets its name from the English nobles who paid for it in 1822.

Extending all the way from the airport to Nice’s old town, the Promenade is one of the top places to visit in Nice…  I joined the Promenade in front of the famous Le Negresco hotel and walked towards the old town, enjoying the sea air and hustle and bustle of this lively part of Nice along the way.

I also made sure to admire the Belle Époque architecture of the buildings along the promenade. Stunning and unique, it characterises the everlasting grandeur of the city, which was cemented as the place to spend the winter after Queen Victoria visited in the early 1900s.

One of the best things to do in Nice is to admire the beautiful city from above! So, I ended my walk along the Promenade Des Anglais at ‘Castle Hill‘. At 92m high, the hill provides stunning 360-degree views over the city.

The actual ‘castle’ at Castle Hill was unfortunately demolished in 1706. However, you’ll still find the ruins of an 11th-century cathedral on the complex, along with a waterfall (built in the 19th century), and an observation deck where you can take in the sea views. 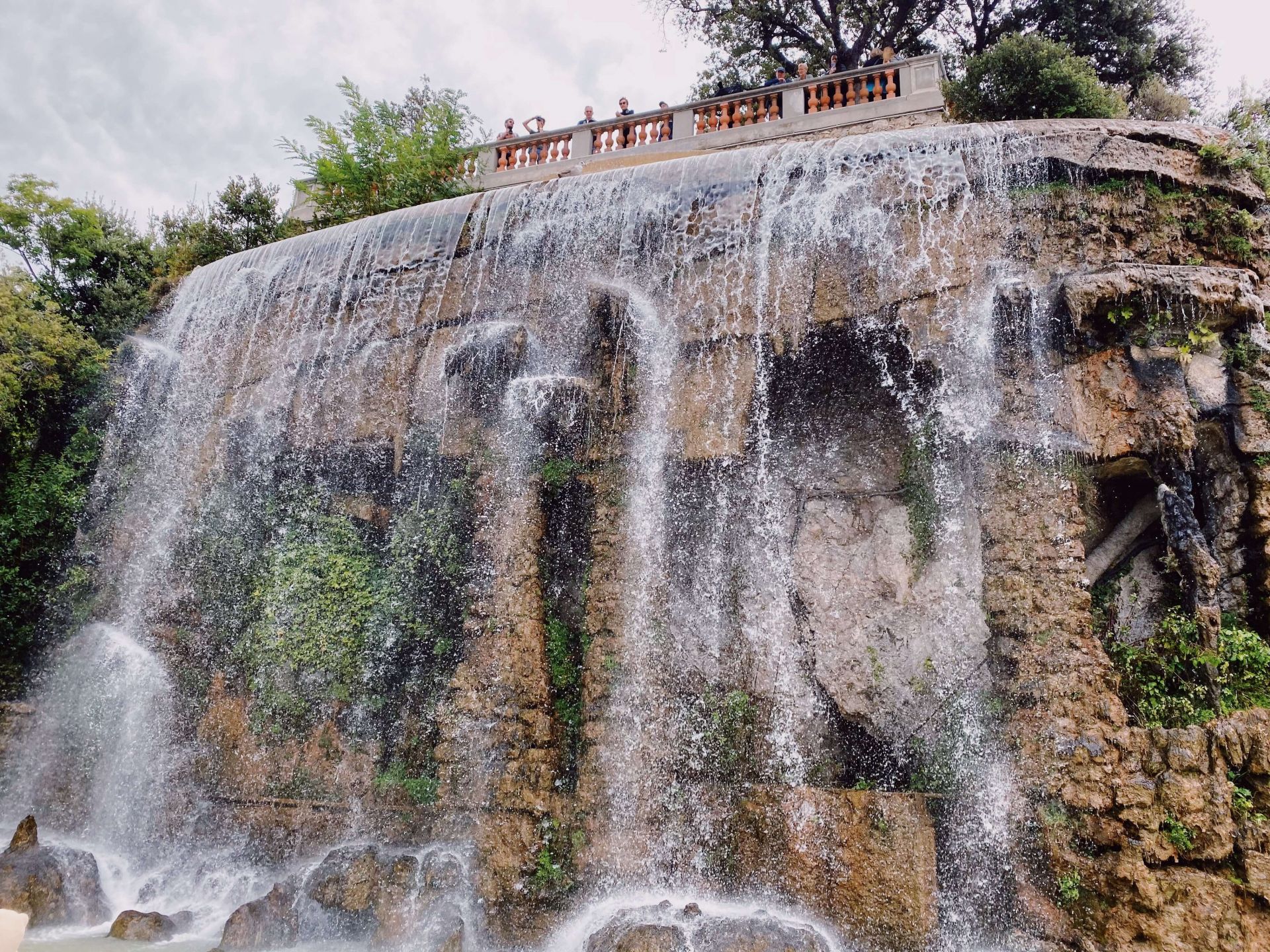 If that wasn’t enough there’s also a park and cafe! I was sure to venture through the park to the other side of the hill which provides another fantastic outlook over the old port of Nice.

I easily spent an hour or two taking in the views, exploring the ruins and enjoying the general serenity of Castle Hill’s park. Meaning it was no doubt my favourite of all the top Nice attractions!

TOP TIP: There are two ways to get to the top of Castle Hill: a staircase right next to the Promenade, or a lift/elevator which is dug into the rock. I opted to take the lift to the top, and while it’s a little old and run down, it worked well, and it’s free! So it gets no complaints from me.

From Castle Hill, it’s only a short walk into the heart of Nice’s charming old town. There’s not much to do here other than get lost amongst the narrow, winding streets…

Therefore, I simply followed my eyes and ears around the maze of buildings, spotting many wonderful shops and bakeries along the way. Other highlights that I stumbled upon included the City Courthouse (Palais de Justice) and the old Baroque Cathedral in Place Rossetti Square. 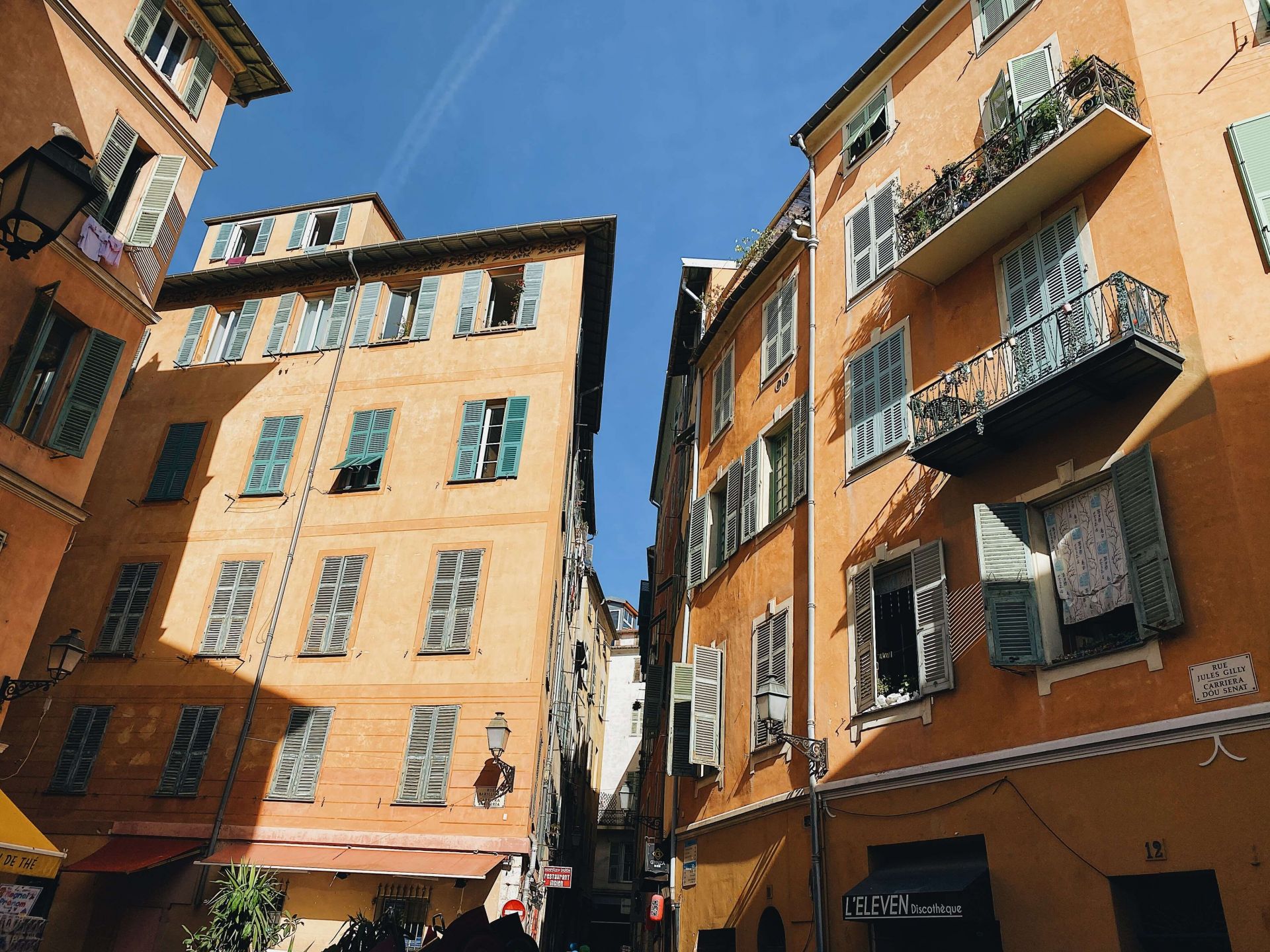 While the Cathedral is worth seeing, I’d put Place Rossetti Square on your list of places to visit in Nice for one other important reason…. Icecream. There’s not one, but three amazing gelaterias in the square!

I opted to eat at Fenocchio’s because of its huge selection of flavors, but to be honest I would have been quite happy to sample a cone from them all!

After filling up on Gelato, I left the old town and walked the short distance to another of the top places to visit in Nice: Promenade du Paillon, which is the largest green space in the city.

This delightful urban park was only created in 2011 when a 3-year development took place to transform one of the city’s main thoroughfares. Today it’s filled with charming gardens, sculptures and fountains! 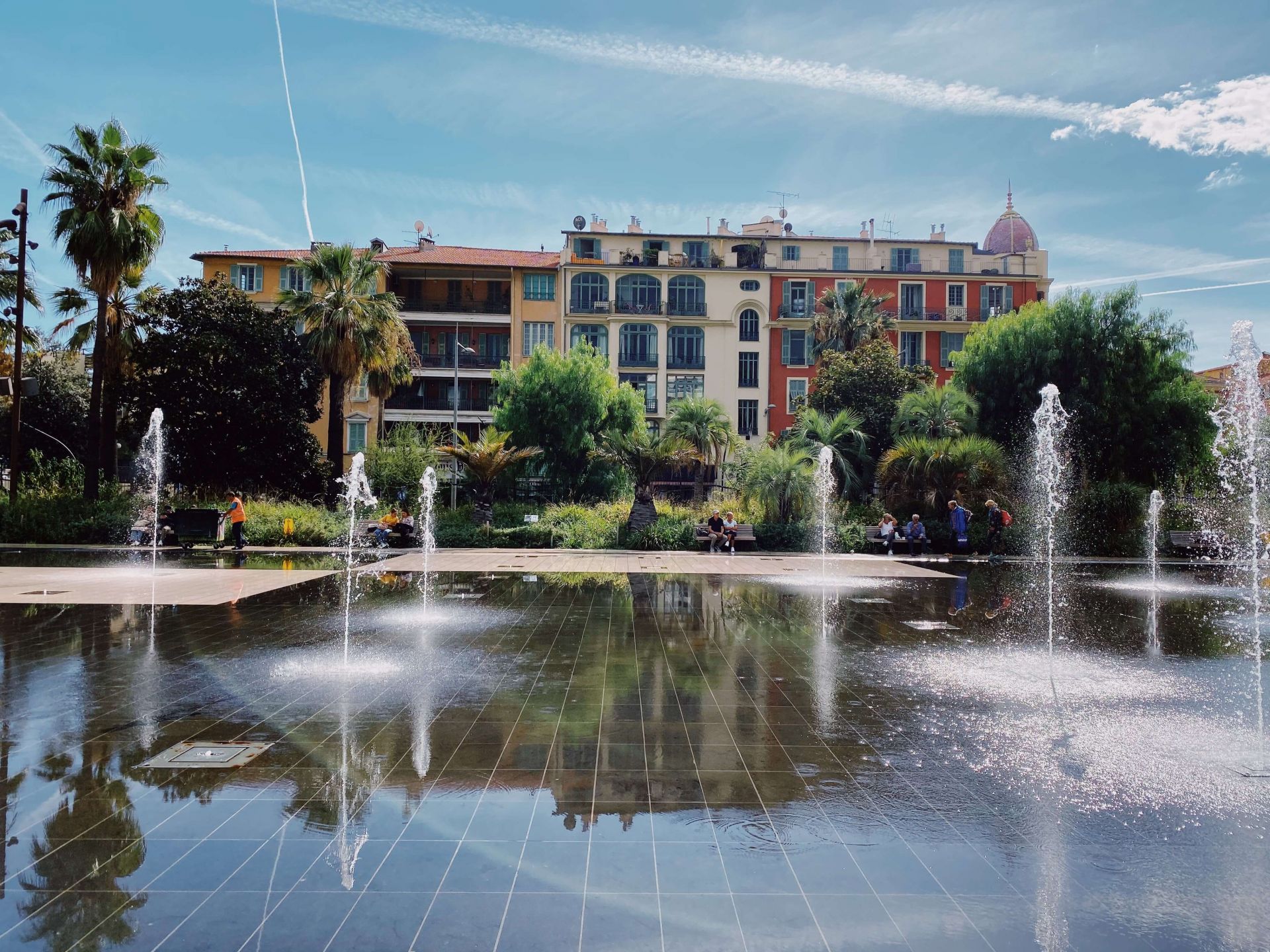 The latter is probably why most people visit… The park’s ‘Water Spout’ Fountains are a fun attraction for kids and big kids alike. I certainly enjoyed watching people attempting to cross the piazza before the jets changed.

Close to Promenade du Paillon, you’ll find the historic Place Masséna square, which is also a must-visit when Nice sightseeing!

Simply put, the square is spectacular! Its centerpiece is the Fontaine du Soleil, (or the Fountain of the Sun) which I found to make the perfect photo backdrop. 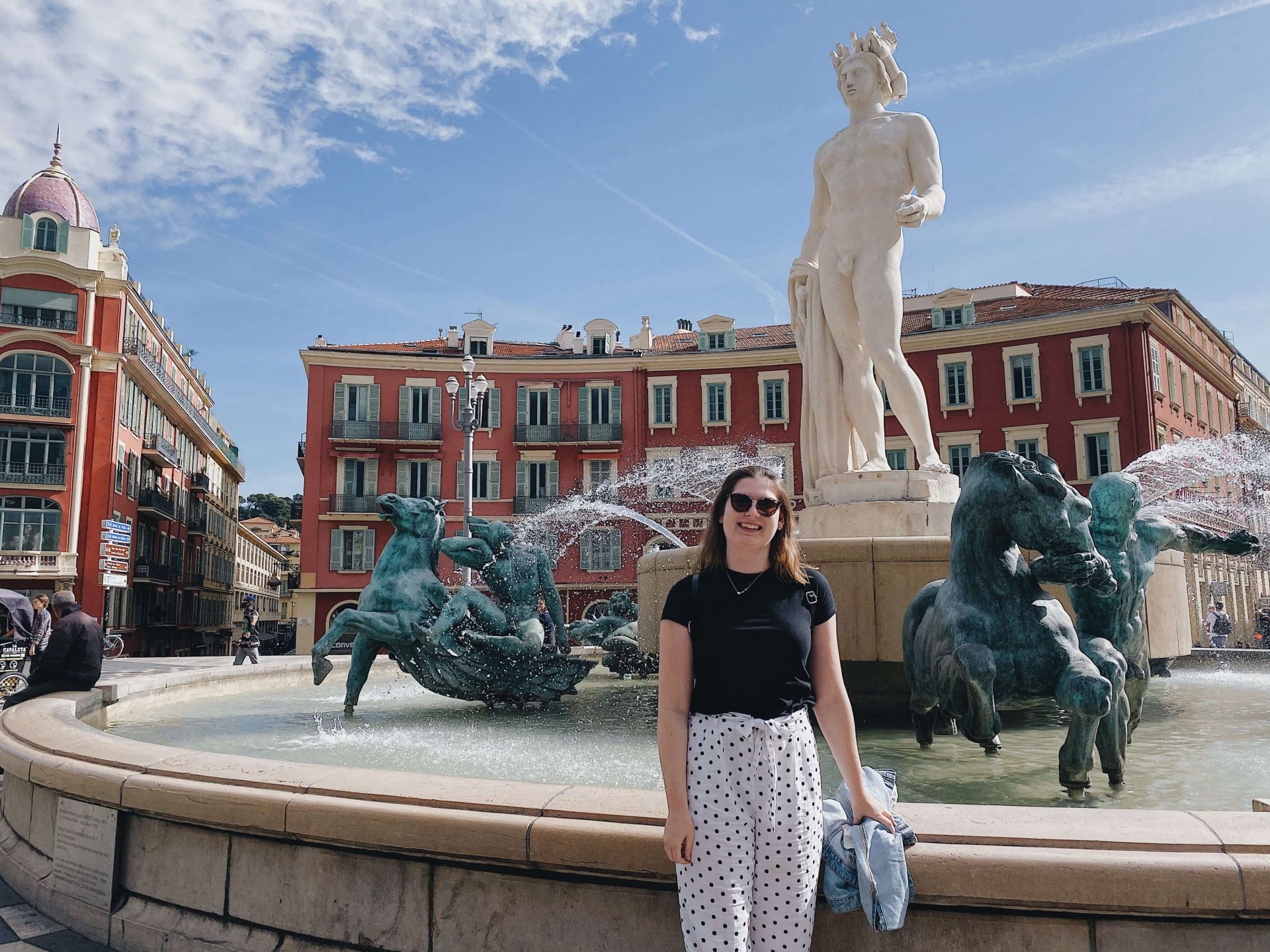 This said, with its black and white checked floor and buildings with Pink façades, the whole square is picture-perfect. Thus, a visit is definitely worth adding to any Nice 1 day itinerary.

Place Masséna also acts kind of like Nice’s main ‘crossroads’ with many important streets leading off it.

If you’re a shopaholic like me, one such street you’ll need to know about is Avenue Jean Medecin. Simply nicknamed the ‘Avenue’ by locals it’s here you’ll find all the best shopping in the city! Therefore, I was sure to squeeze in a bit of window shopping into my one day in Nice itinerary. 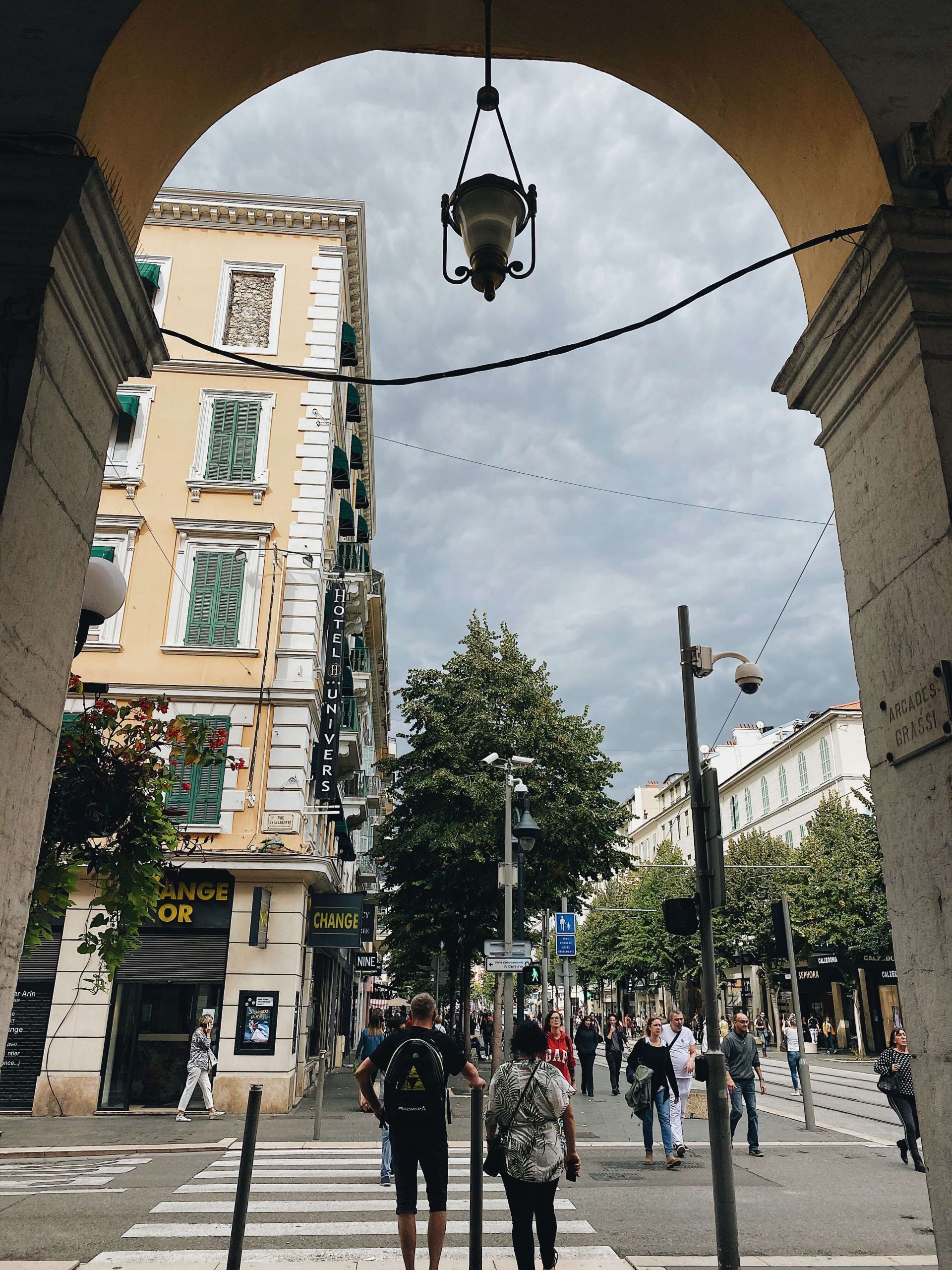 TOP TIP: The best way to explore the rest of the Riveria on day trips from Nice to places like Monaco and Menton is via the city’s main train station, which can be found at the opposite end of the ‘Avenue’!

Spending time on the beach is almost obligatory when you visit Nice France. Therefore, I ended my day by heading down to one of the city’s pebbled beaches. With the sun setting over the Mediterranean, there was really no better way to end my one day in Nice. 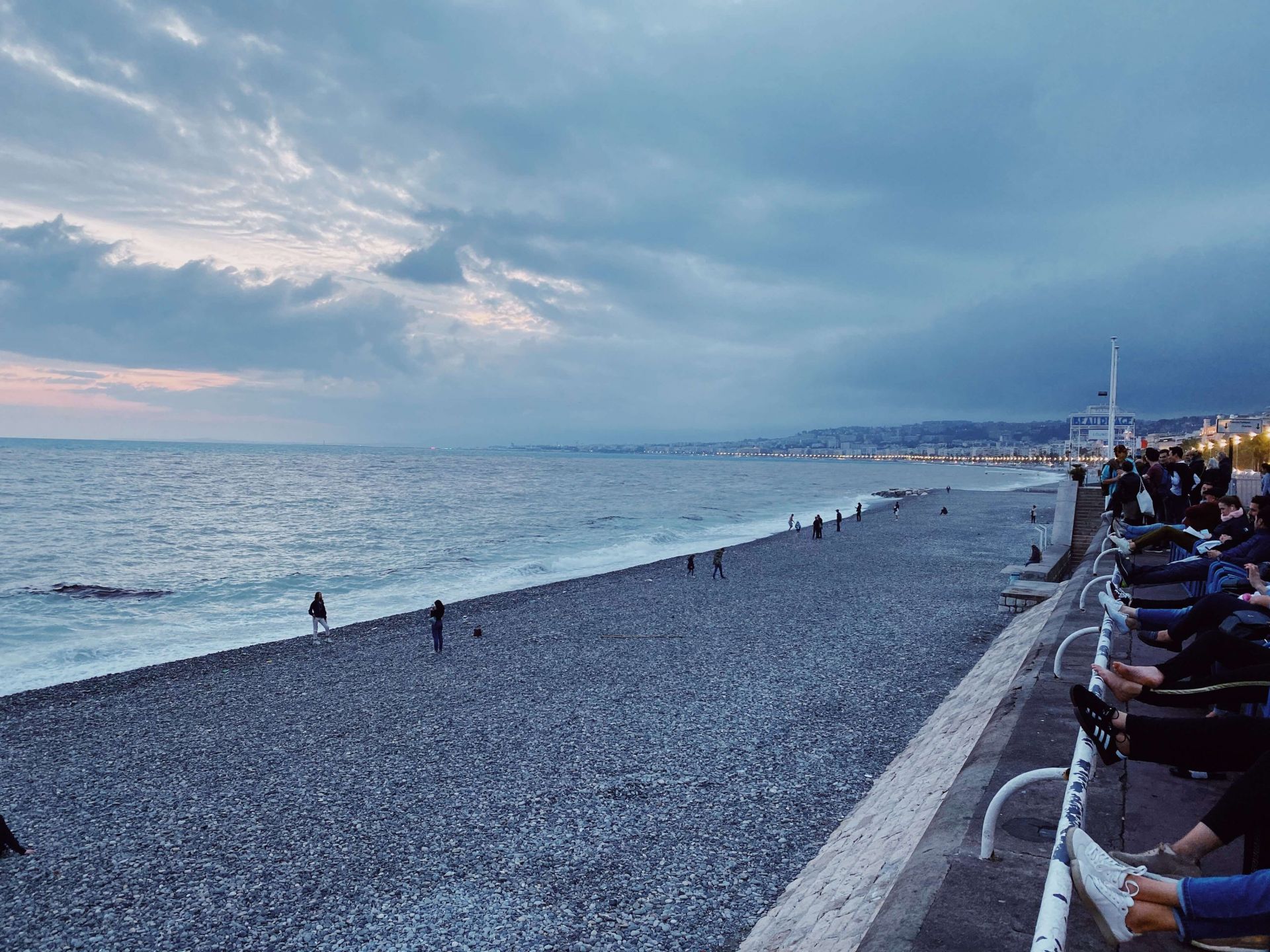 Other Things to See in Nice –

While I was able to do most of the top things to do in Nice in a day, there were a few Nice attractions that I missed. Most notable is the Cours Saleya Market. Located in the old town, it’s a fabulous flower and fresh produce market which is set up every morning (apart from on Mondays when it’s replaced by a flea market).

I did walk through the market in the afternoon, and while some sellers still had flowers on display, I definitely didn’t see the market in all its glory. Therefore, I’d suggest putting it first on your itinerary.

Another of the top things to see in Nice is the Russian Orthodox Cathedral, which is the largest church of its type found outside of Russia. Beautiful and ornate, the Cathedral is one of the city’s best-kept secrets. However, it’s a little off the beaten track so can be difficult to see when you only have one day in Nice!

This said I probably could have squeezed it into my itinerary, but in all honesty, I was quite content spending the evening watching the world go by on the beach…

I hope this post helps you decide what to see in Nice in one day. And while more time in any city will help you discover its hidden highlights, I do honestly think that one day in Nice France is plenty of time to see all its well known ‘attractions’ and gain an appreciation for the beautiful city.